Investing With the Poor Part II

This is part of a series profiling the members of the Genesis spinning plant. As many of you know, the Genesis co-op members have committed themselves to working without pay for the past two years in the construction of their building, organizing their co-op and training members. It’s been hard, however, to find groups willing to commit funding to the project. So many have said to us, “We’d love to help, but start ups are too high risk.” While we understand that, we also know that the co-op members themselves have already taken a greater personal risk than any funding agency, and we see their sacrifice as a commitment that will ensure Genesis’ success in the future.

Like all active members of Genesis, Pablo González can see the doctor at the CDCA’s clinic in 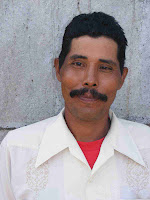 Nueva Vida without paying the $1.50 consult fee, but for Pablo this care is especially important. He’s a diabetic who walks with a severe limp caused by permanent damage to his foot and leg. Last week while working on the co-op Pablo had a cement block fall on his foot. While the initial injury was minor, it has since turned into a serious infection, and he is depending on our clinic to keep him from the very real danger of losing his foot or even leg. He’s been to the clinic twice this week and was ordered by the doctor to rest. Although he isn’t earning a salary at the co-op, Pablo hates to miss a day of work.

For nearly two years, Pablo worked as a security guard at night and then came to work on the spinning plant construction during the day,

sacrificing sleep and his family to make the project a reality. After a long fight, he has finally able to get disability benefits and quit his night job to dedicate himself more fully to the co-op. With five children, two grandchildren and his wife and mother-in-law dependent on him, Pablo cannot afford for Genesis to fail. “I hope to gain a future for my children, and pull us out of poverty.”

Pablo and all the other members of the co-op need other people to help them pull themselves out of poverty. That’s what we mean by shared risk: they have risked their families’ futures in a way that most of us cannot imagine, and now they need other people to take a risk by helping finance their project.

If you know anyone with “patient capital” willing to invest with the poor, we are looking for folks to lend money to the CDCA’s Shared Risk Investment fund for 5 years at 0-5% interest. Please have them write us at jhc@jhc-cdca.org

Posted by Center for Development in Central America at 10:13 AM

Investing with the Poor

As many of you know, for more than two years now the CDCA has been working to help set up a spinning plant with the Genesis Cooperative and its 35 members. Although the members have committed themselves to working without pay for the past two years in construction of their building, organizing their co-op and training members, it’s been hard to find groups willing to commit funding to the project. Still, we have done what seemed impossible: through mainly individual donations to our Shared Risk Investment Fund, the CDCA has so far loaned more than $130,000 in materials to Genesis for construction, money that the co-op will pay back so that they and other groups can start and improve worker-owned businesses through the CDCA Fund. Unfortunately, we’re still lacking around $100,000 to loan to Genesis to finish the building, and we need that urgently because we hope that we have finally found a group that can loan them the $300,000 needed for machinery. We have looked for funding everywhere, and so many groups have said to us, “It’s a great project, but we can’t afford that risk.” While we understand that any start up is a risk, it’s hard for us to conceive of a greater risk that that already taken by the co-op members themselves. Over the next few weeks we’ll give you a glimpse into the lives of a few of the Genesis members:

At 64, Petrona Valle is one of the oldest members of the Genesis cooperative, and her son Geovany is one of the youngest. Petrona’s husband was a security guard in the process of trying to get a retirement pension when he passed away in November. Now there is no one in their household earning a salary, yet Petrona and Geovany continue to come to the cooperative every day, working without pay as they have for the past two years, working to build a better future. Currently Genesis is giving them each a “help” of about $15 per week for their work, and that is how Petrona and her son are surviving. “I came to the project when I heard it was for housewives, the unemployed of all ages, all religions and politics,” Petrona says. Until Genesis begins production – hopefully in June – and they start earning a salary, Petrona and Geovany, will find a way to continue to come to the cooperative because they can’t afford to lose the two years and nearly 2,000 hours they have invested in their business.

Petrona, Geovany and all the other members of the co-op need people to think big with them. 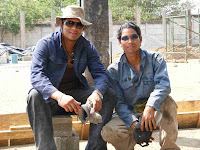 That’s what we mean by shared risk: they have risked their families’ futures in a way that most of us cannot imagine, and now they need other people to take a risk by helping finance their project.

If you know anyone with “patient capital” willing to invest with the poor, we are looking for folks to lend money to the CDCA’s Shared Risk Investment Fund for 5 years at 0-5% interest. Please have them write us at jhc@jhc-cdca.org

Posted by Center for Development in Central America at 12:55 PM 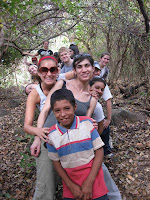 The Center was fortunate to host a Brigade from in , from 5-13 January. As always they take one day to go to El Porvenir, the organic coffee cooperative with which we work closely.

This cooperative is an amazing testimony to the power of people working together for the common good. They disagree in religion and politics, but they agree on economics…to take care of each other and therefore have a quality of life that would otherwise be unheard of. They work together, share their resources including donations, and they keep the 2000 acres that would have long ago been taken by a bank.

This trip included 31 people. El Porvenir is 100 a kilometer trip but it takes well over three and a half hours to get there, because 26 kilometers is down a dirt road and the last 5 kilometers is straight up the mountain…no hairpin curves on this baby! 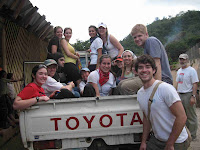 With this large of a group we take the bus and two other vehicles. We get to the bottom of the mountain, we usually split the group up…half ride in the trucks and half ride in a trailer pulled by the cooperative’s tractor BUT THIS time, the co-op was hosting another group of close to twenty and had the tractor in use…so up we go with 31 people in two trucks. Many bargains were made with the universe if we made it safely…fortunately those bargains are now being called in. 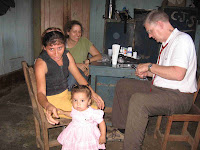 The importance of this brigade going to see these amazing people is two-fold…for the students to learn and for their campus doctor to see patients. Dr. Don Stechschulte has now come to 22 times…the community claims him as their primary care giver. Imagine that! Access to your primary care giver 2 or 3 times a year, but that is life in the remote areas of .

Posted by Center for Development in Central America at 2:32 PM