What Keeps You Awake At Night? 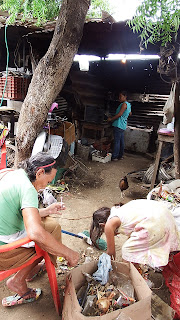 “Come inside, I’ll show you,” says the woman, beckoning us into her yard. She takes my arm and pulls me past the two pigs snuffling slops, past the old woman and young girl sorting through trash and over to the kitchen: a wood stove made out of a wheel rim and a fan cage under a partial roof of rusty metal sheeting. Next to the stove she points to her outhouse. 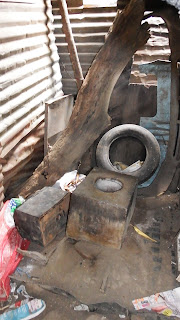 “This is our latrine. Ten of us use it, and it’s full. There’s nowhere to dig another one,” she gestures to the tiny yard between the rooms of the house and the outside wall of their squatter’s shack on the edge of Nueva Vida.” I ask if I can take pictures, she says sure, as long as I don’t mind the smell. I pull back the plastic door and snap a few shots, but it’s impossible to get perspective on just how close the outhouse is to the kitchen where food is prepared, impossible to convey the stench through the lens.

We ask her the next question on our form, “Would your community be safer with street lighting?” 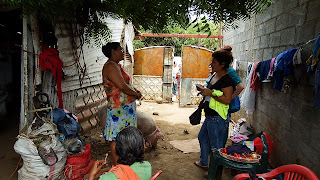 “Of course,” she answers, turning and showing me her front gate. “Look, we’ve had to reinforce our gate with steel so that my family doesn’t get hit by stray bullets when the gangs fight in the street. We need to make our community safer.”


I was out with our Clinic’s health promoters and public health graduate students from East Tennessee State University taking survey on the quality of life in Nueva Vida. In past years, our work with ETSU has been surveying the community on topics such as birth control, diabetes and mosquito-borne illnesses.

This year, we broadened the topic beyond strictly medical issues because we felt a need to look at the community’s health in a broader sense. At the Clinic, we’ve seen that it’s possible to improve people’s health to a point, but then patients reach a plateau that is impossible to move beyond using only medical solutions. The poverty in which our patients live means that other factors contribute to their poor health – safety, well-being and larger community factors. Therefore, we chose to ask them collectively: “What keeps you awake at night? What is your biggest worry for you and your family?” 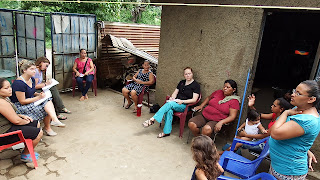 To facilitate those conversations, our network of lay health promoters organized block meetings in their homes where small groups discussed the issues most affecting their families. Students then ranked the topics residents were most passionate or most concerned about and created a survey which we took door-to-door in the course of a week.
Nineteen years ago we held a similar series of community meetings in the newly-formed barrio of Nueva Vida shortly after Hurricane Mitch, and in those meetings, access to basic health care and jobs were at the top of the list of concerns.

In the meetings we just held, those two topics didn’t even make the list of top five concerns. Instead, the topics closest to people’s hearts were gray water (used wash water that runs through the dirt streets), lack of a sewage system, unpaved roads, and street lights.

As I sat listening in those meetings, I was surprised at the marked change. I wasn’t there in those first meetings, but I was in Nueva Vida around that time, and the desperation there was palpable. This time around, the conversation was fundamentally different.

In 19 years, not only has Nueva Vida changed, but Nicaragua has changed fundamentally: poverty levels are now under 25%, down from 42% in 2009 and formal employment grew by 10.8% just last year.

Why is health care no longer a top concern? Not only do the people of Nueva Vida count on the basic and specialized services of our Health Clinic, but they have a government health post in the barrio, an actual hospital in nearby in Ciudad Sandino, and on a national scale, the Nicaraguan people can count on a series of new and expanded hospitals around the country.

Walking around the barrio, I see so many changes that my heart soars with hope: people have houses, the trees we planted so long ago have been growing for nearly twenty years. And yet… 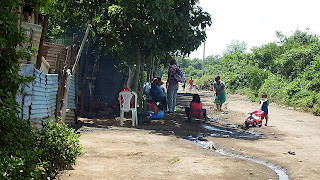 “I’ll be honest with you,” says one woman, standing outside her house where garbage trucks race through gray water mud puddles, headed to the dump around the corner. “There are 15 of us in my house, and we don’t have an outhouse. We just go across the road to the empty lot and go in the bushes. There’s too many of us, we don’t have space to dig a latrine. We need a toilet, we need a sewage connection to get rid of this gray water. We need this road paved for all the garbage trucks throwing up dust and mud.” 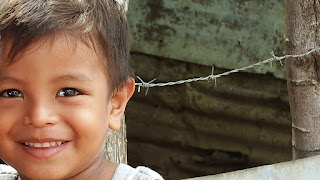 The results of the survey were that gray water and sewage were top priority at 62%, lighting/safety came in next at 26% and housing at 11%. Outhouses are most common in Nueva Vida, 59% of houses have one and 5 people use it on average.


If we are dedicated to the holistic health of a community in Nueva Vida, then it looks like we have our work cut out for us. - Becca
Posted by Center for Development in Central America at 4:58 PM