I watched Real Time with Bill Mahr last night and one of the comments was “how do you feel with two weeks of basically ‘normal’ news?”  Normal? 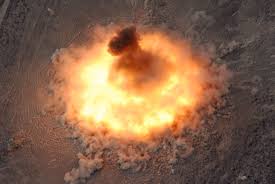 In Afghanistan on April 13th, the U.S. dropped the largest conventional bomb ever!  How can that be normal?  That is horrifying!

Afghani farmers seeing the blast thought it was a nuclear explosion and worried about radiation.

On April 12th, Pres. Trump announced that he was sending an armada as a warning to North Korea (turns out the armada was going in the opposite direction).  Recently North Korea is threatening to sink the armada…
None of this is normal.

It is frightening.  I have two sons still within the age of a draft.  I have children, grandchildren, mother, brother, nieces, nephews, and friends that I cherish dearly living in the States.  War…stupid, dangerous war... seems more immanent. 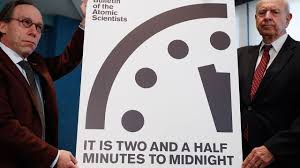 The Doomsday Clock, set by the Society of Atomic Scientists, is set at its lowest since 1953…two and a half minutes to midnight.  It was moved the last 30 seconds when Pres. Trump took office, because of his comments on nuclear weapons.  This clock is the representation by atomic scientists of how close we as humans are to global destruction.  Add to the above…

Now the U.S. is saying that Nicaragua is basically getting into bed with the Russians…
therefore, the U.S. should block loans and threaten this country as the U.S. has done in the past.  Nicaragua is once again going to be a pawn in the game of chess that the U.S. and Russia (in the past U.S.S.R.) has been playing for decades. 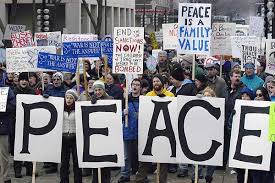 Time for the abnormal.
-Kathleen

Posted by Center for Development in Central America at 3:43 PM