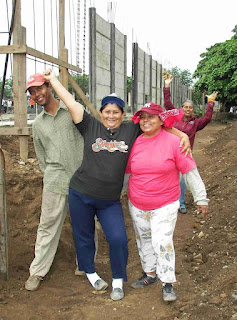 Five years ago yesterday, a group of 45 women and men showed up to work for no pay. They took a chance on making a better future for themselves and their families, they took a chance to own their own business. This was Genesis, the cooperative formed to spin cotton into yarn, made up of mostly women – all strong of spirit if not physically strong – who built a 15,000 square foot building by hand. Over the past five years many who started have left – most in the first few months of working for no pay as their sweat equity buy-in to the co-op. Some left amicably to pursue other opportunities; some left acrimoniously – twelve left at once in 2009; today the quiet and determined Doña Ramona resigned from the cooperative for health reasons.

The 13 active members who remain are remarkable people: brave, determined, and strong willed. They are also tired, disillusioned and emotionally devastated. For the past two and a half years their building has sat finished awaiting machinery, and Genesis members struggle to keep alive the hope that one day their factory will be filled with the sound of yarn spinning machines. 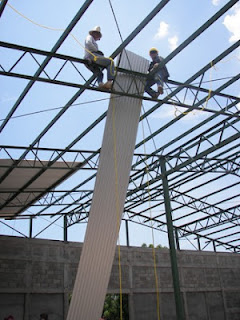 As they were finishing construction on their building in 2009 – construction materials were financed through the JHC-CDCA’s revolving loan fund, the Vida Fund – Genesis and the JHC-CDCA negotiated the purchase of spinning machinery. We had looked at used machinery in three different countries, and sent a third party textile expert to two different plants to inspect machinery and make recommendations. Together, the JHC-CDCA and Genesis opted to purchase machinery from a plant in Venezuela through a textile machinery broker in South Carolina, Coker International. Coker had been recommended to us by many in the industry and we had previously bought machinery from them for the cotton gin and had good results. Because the Vida Fund didn’t have funds to purchase machinery and because Genesis couldn’t get financing without credit history, the JHC-CDCA spent three years looking for financing for machinery at low interest rates, but most social investment funds shied away from risky start ups after the economic crisis. Finally, at the end of 2009, we were approved for a loan of $230,000 from the Local Development Fund in Nicaragua…at 14% interest.

Between October and December 2009 we made down payments totaling of $150,000 to Coker International for the purchase of spinning machinery. We have yet to receive this machinery.

After initial optimism that the machinery would be delivered to Nicaragua before the end of 2009, we spent most of 2010 being strung along with tales of setbacks at the plant in Venezuela. In March we sent someone to Venezuela to confirm that the machinery we had purchased was there, and was being loaded onto containers. By August we realized we’d been taken for a ride, and began talking to our lawyers in the U.S. 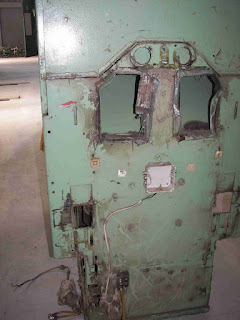 In November 2010 we were surprised to discover four containers of equipment had been introduced into Nicaragua in our name without our knowledge and were incurring fines at customs. We were obliged to spend thousands of dollars to import these containers and move the equipment out to the factory. Although it was only one-quarter of the equipment we had purchased, we had hoped that at least some of the equipment would be usable. As soon as we unloaded it, however, we discovered that it was not the equipment that we had ordered – it was not even manufactured in the same era as the equipment we had purchased, and is in such terrible shape that it would cost more to make operational than it’s worth. So now part of the factory houses what amounts to very expensive scrap metal.

In January 2011 we filed a lawsuit against Coker International and its President, Jack Coker, in North Carolina. All of 2011 was spent dealing with stall tactics and more than a year later the case still hasn’t reached the discovery phase. Periodically we’ve received “settlement offers” from Coker via his lawyer – the latest of these came a few weeks ago and was rescinded before we could even respond. What each “offer” has amounted to so far has been that Coker will deliver the equipment once we pay him the balance due on the machines…the last offer was even more insulting: pay the balance and then we can go to Venezuela ourselves to get the equipment, if it’s still there.

While we fervently hope to have some satisfactory resolution to our case this year – it is once again on our list of goals for 2012 – it’s difficult for us to move forward with the spinning plant until then. We have looked for used equipment and found nothing that comes close to the quality and price we had found in Venezuela. While we await some resolution, we are paying on the loan we took out for the equipment purchase – 14 % annual interest – with no income from Genesis to help pay the loan; and we’re not taking money away from other projects to do so, we’ve dipped into our own retirement savings. Without the return of the money that we gave Coker International in good faith, we cannot afford to purchase equipment. Our hands are tied, and it is absolutely frustrating. 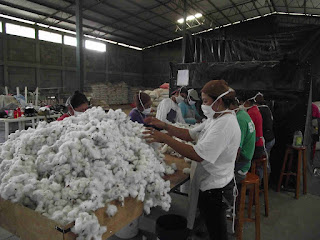 If it is frustrating for us, it is maddening for the Genesis members. Because the JHC-CDCA purchased the equipment in our name, we are the only ones who can take action – the folks at Genesis have no direct recourse, and they hate feeling helpless. Meanwhile, many are no longer being supported by their families either economically or emotionally. A year ago we began to look at alternatives with the Genesis membership: ways to get them earning money while we sort out the equipment debacle. It was excruciating for them to work on alternatives – they are still so set on the goal of eventually running a spinning plant. Finally we and they agreed on the most practical course of action: a constellation of alternative work including inspecting cotton prior to the ginning process, pressing cottonseed and making biodiesel and cattle feed. 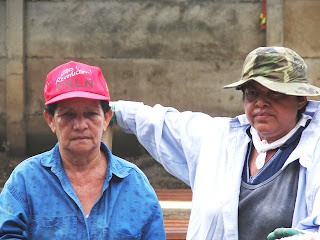 At the beginning of January they started working full time in cotton inspection, earning the established minimum wage and receiving health care and social security benefits. Once cotton season is over, they will move on to press cottonseed for oil, making biodiesel from the oil and cattle feed from the leftover cake. At their request, the members of Genesis are working as individuals for the agricultural co-op, COPROEXNIC, which on the one hand means they don’t need to worry about the day-to-day operations, but on the other hand they are subject to their COPROEXNIC manager. This has been a hard adjustment to make, and while it’s good to finally be earning a salary, it’s a far cry from the exhilaration of starting production in your own business, and the long-term fate of the co-op is still in the hands of the U.S. court system. Happy 5th Anniversary, Genesis, may this year see justice done. – Becca

What can I do to help? 1) You can pray and send all your positive thoughts this way! 2) If you have contacts in local or national media, help us publicize the equipment tragedy. 3) Help us raise money for the Vida Fund so we can continue putting people to work. Email us at: jhc@jhc-cdca.org

Posted by Center for Development in Central America at 10:38 AM