Just 10 days ago we kicked off the Stone Soup Fund, asking people to give just $10 with the goal of raising $100,000 to finish the Genesis Spinning Plant. In that time we've raised $876 on our Facebook Cause and more (at least $25!) is on its way in checks. By the end of this week we hope to have raised $1,000! We think that's pretty awesome.

Unfortunately, that $1,000 is only 1% of what we need! We really believe that many people giving just a little can make such a difference...it can mean steady jobs for 35 people and food on the table for their families. To make this work, we need all of you to ask 10 friends to give $10.

The members of Genesis have worked 2 years with no pay...and they need to put in their floor now. We need $6,700 to buy all the metal that will reinforce their concrete floor. We have someone who invested their inheritance at 0% to the Shared Risk Investment Fund and with that and what we have raised through the Stone Soup Fund, we can now buy the metal! If you know anyone who can invest for 5 years at 0-5% interest, please put them in touch with us at jhc@jhc-cdca.org.

Genesis can now put the metalwork together while we raise the money to buy concrete.

This past week, friends have asked us lots of good questions about the Stone Soup Fund:
So how are we going to raise so much money is such a little time? We know people don't have much to give right now, that's why we're asking for you to donate just $10, and ask 10 other people to give just $10 each and also ask 10 other people. We may not have much, but we are many...if everybody gives just a little, then the Stone Soup pot will fill up, and the 35 members of Genesis will have work...a true cooperative effort.

To give on Facebook click here
To give online click here
Send checks to: CDCA - Stone Soup, 352 Carly Lane, Rock Hill, SC 29732
Posted by Center for Development in Central America at 1:32 PM

A young woman, Maria, had had no employment for two years, but had worked hard trying to make a future. All of a sudden she was getting married and needed to feed the town coming for the wedding.

What was she to do? She had no money. Her wealthy uncle was not going to lend that kind of money for the town to have a party because his investments had taken a nosedive, but she was a clever young lass and knew that if everyone gave a little, then it could be done. So….

Maria announced the morning of her wedding she was making the best wedding soup ever to be tasted with just one stone…one stone? Yes. A neighbor lent her the largest pot of the village to see what she could create with one stone. Maria said she had the perfect stone ...so she filled the huge pot with water and plucked in the stone…and watched it come to a boil.

In fact most of the town had heard the rumor and so came to see this “magic” stone.

“Now, this soup tastes good, but if it had a bit of salt….” said Maria as she kissed her fingers.

“I have salt,” an interested lad exclaimed and ran off.

“Yum,” Maria said. “But with some potatoes, it will be exquisite.”

“I have potatoes,” said the judge of the town and he went to get a sack.

“Onions really spice it up nicely,” said Maria and the baker went off for onions.

Then Maria slowly suggested carrots, celery, meat, etc. Each time she tasted it, the whole village pitched in.

“Oh! The soup is done but I only have one bowl and spoon,” sighed Maria.

Tables, bowls, spoons…and then flowers and music and bread came pouring out of the houses…the wedding was the most wonderful wedding in the village’s history and the soup…everyone agreed it really was the best soup anyone had every tasted and all Maria had was one stone.

Stone Soup…it takes one stone and a little from many people.

The Genesis spinning plant co-op needs stone soup. We are establishing our Stone Soup Fund to help the cooperative members who need to finish their building after working for two years without pay…all their stones are in the building.

How does it work?

To donate online or send a check go to www.jhc-cdca.org/credit.html

Posted by Center for Development in Central America at 3:27 PM

is International Women’s Day (IWD). It was first observed on 28 February 1909. It later came to be observed as a memorial to the women who died in the Triangle Shirtwaist Factory Fire of 25 March 1911*, the worst work place disaster in until 9/11.

Women who sewed blouses (shirtwaists) were caught in a fire and the exits were locked. The owners claimed innocence but did have to pay $75/victim damages in a civil suit while the two owners were paid $400/casuality by their insurance. This fire became a symbol for women workers worldwide….146 women died…many jumping 9 floors to their death to get away from the fire. 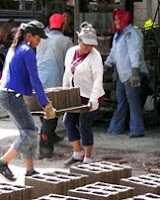 In 1985, I came to on a Witness for Peace Women’s Delegation to observe International Women’s Day. Great! I wanted to come to . I like being with women…I knew nothing about IWD. We walked parts of a road from Esteli to San Juan de Limay so that mothers of children, who were slaughtered by the U.S.-backed Contra, could place crosses in their memories near the places where their children had died and often been tortured.

Needless to say it was an intense, sad, and humbling experience. We got to the small town of and they had an “acto” or program for and with us in honor of IWD. They told us why we celebrated or re 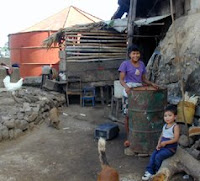 membered IWD…imagine my surprise to know that it had happened in my country and I had had no idea…and I was a history major. It has constantly amazed me how much the Nicaraguans teach me about , my own country, and the world.

Women laborers need a day of recognition. They work hard in the work place, get paid less than men, and then go home and care for the family. They are strong, courageous, and hold society together. Happy International Women’s Day!

Posted by Center for Development in Central America at 7:38 PM