Here is an example of how many wonderful people are helping us out in the most creative ways. Last week our former Volunteer Coordinator, Eric Gruen, and his wife Molly Joy Matheson, launched peacephotography.org, featuring their stunning 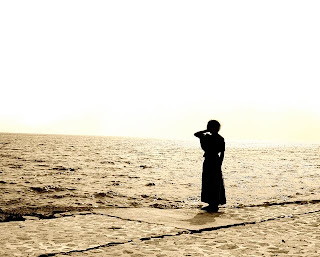 photos from around the world.

As Eric explains, “There is so much beauty, courage, and hope in this world, yet also so much pain, struggle, and need. I can't really pretend that photos ever come close to capturing this. But, I do believe that they can remind us of communities outside of our own, and our strange common bond with those whom we don't know, and will never meet.”

After his year with us, Eric and Molly spent 2008 traveling arou 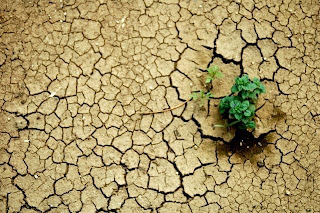 nd the world and volunteering with different organizations. Peace Photography supports those non-profits (including the CDCA) through online sales of prints, notecards and calendars. Each individual photo is linked to a specific non-profit (eg. When someone buys a photo of , 100% of the proceeds go to the CDCA). 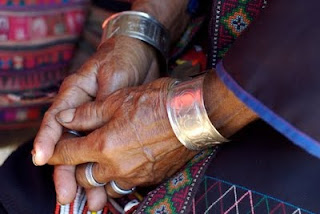 to one another. “Many of our leaders have decided for us that the best choice is to live in fear of those ‘others,’” says Eric, “that it is somehow best to keep ‘them’ on the opposite side of walls, razor wire, gun barrels, and bombs. I do not agree. I believe that we do have other choices. Better choices.” Peace Photography helps to remind us what those choices are. Please check out this very cool project.

You can see a gorgeous slide show of Around the World in 365 Days at: http://www.peacephotography.org/search/label/slideshows

To see photos of go to: http://www.peacephotography.org/search/label/nicaragua

For pictures of (which also benefit the CDCA) go to: http://www.peacephotography.org/search/label/guatemala

Eric and Molly hope to expand Peace Photography to include the work of other photographers in the near future. If you are interested, you can write to: eric@peacephotography.org

Posted by Center for Development in Central America at 2:54 PM

Spinning machinery on its way! 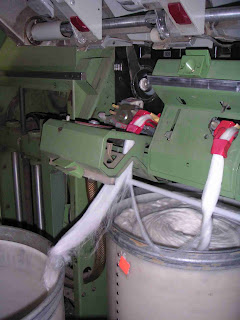 The spinning machinery for the Genesis cooperative is on its way! The equipment has been purchased and we expect it to ship in November to arrive in before the Christmas holidays. This is cause for great celebration before we get down to the work of figuring out how to run a spinning plant!

Over the past six years we’ve written literally dozens of grants seeking funding for the machinery and have received letters back saying, “What a wonderful and ambitious project! When it’s up and running, let us know, we’d love to be a part of it.” This frustration was a huge learning process for us, making it clear just how difficult it is for a medium size business to get start up capital – most funding agencies don’t give grants for construction or machinery – and ultimately inspiring us to set up the Vida Fund to help co-ops in this position. 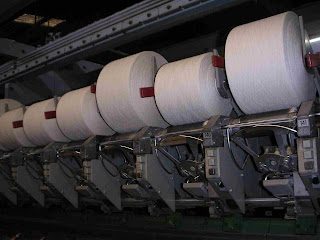 fledgling Vida Fund, however, doesn’t currently have enough capital to cover the purchase of the spinning machinery. We have been lucky enough to find the Local Development Fund (FDL), a Nicaraguan microfinance institution which shares our vision of creating an organic cotton production chain in and is acting on this vision by loaning the money for the machinery! The loan is for $230,000 to be paid back in six years at 14% interest. That interest rate – and 0 commission and 0 legal fees – is unbelievably good in , where many microfinance institutions give a good deal at 35% interest and a more likely rate is 50%. Still, the co-op will end up paying nearly $100,000 in interest alone.

How can we help? The co-op will be allowed to pre-pay the loan. Our Vida Fund loans to Genesis at 6% annual interest, but lacks sufficient capital to loan the $230,000 for the purchase of machinery. New donations and loans coming into the Vida Fund, however, can go toward paying off that machinery early, saving Genesis thousands of dollars. If you or anyone you know can donate or invest in the Vida Fund (donations of any size, loans minimum of $5,000 for 5 years), please contact us at jhc@jhc-cdca.org.

We expect the spinning machinery to arrive in Nicaragua in early December…it will be a jubilant moment for co-op members to see the machinery in their building, and the New Year will be a New Genesis, a New Beginning…the beginning of the adventure of setting up machinery, learning to run it, learning to run a business…it’s going to be tough. But at this stage, we know we’re up to the challenge. – Becca

Posted by Center for Development in Central America at 11:43 AM

An Inside Look: Pouring the floor at Genesis

The other day I went over to the Genesis spinning plant to help them pour the concrete for their floor. I knew this was tough work, intellectually. But now while my arms and back and legs are still aching, let me give you an idea of how hard it really is.

It’s done by hand. Yes, they are pouring the 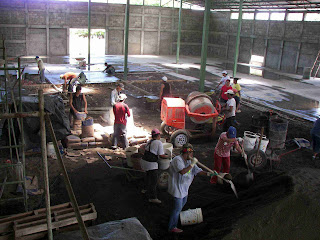 floor – an area of more than 15,000 square feet – by hand. They have divided their floor up into 84 sections, and pour three to four sections each morning. Each section takes around 20 bags of cement, 40 buckets of water, 40 buckets of gravel and 60 buckets of sand. It takes them about an hour to pour each section, and they cannot stop – once they start pouring they have to keep going for three or four hours. Once they have finished pouring they eat lunch – these days they often make a big soup for everybody so they can be sure folks have at least one good meal when working so hard. After lunch, they rake sand, lay metal reinforcement and wire it to its supports and put forms in place to ready the floor for the next morning’s concrete pouring.

Here are the players: 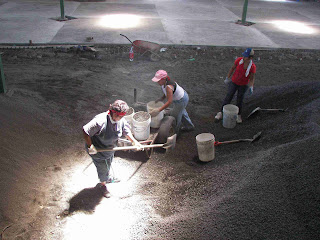 Natalia & Petronila shovel gravel into buckets – four buckets for each load of cement – and lift them onto a cart, which they wheel over to the cement mixer. 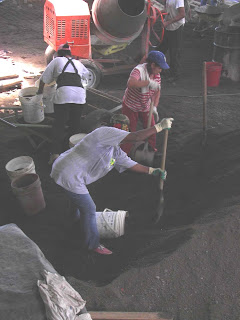 shovel sand into buckets – six buckets for each load of cement – and lift them onto a cart, which they wheel over to the cement mixer. I did that job the other day with Ramona, tiny woman in her 50s who is now on doctor’s rest with an inflamed shoulder from the day I worked with her. 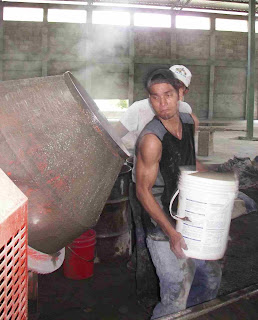 Ervin, Geovanny & Pablo work the cement mixer – pouring buckets of water, gravel, sand and dumping two 50 lb bags of cement into the mixer for each load. All of this has to be lifted above shoulder height into the 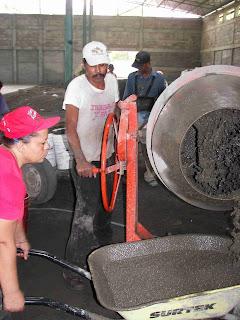 mixer and these guys can’t stop…they lift for three to four hours without a break. Ervin & Geovanny are young guys – the only two members of the co-op without kids – but they are worn out. Watching them was the first time I have seen young strong Nicaraguan men visibly wavering under physical strain. They work hard, but the women can’t do this job because they don’t have the upper body strength. Pablo – a diabetic who is just back from several weeks on sick leave when he was in serious danger of losing his foot to infection – runs the mixer, controlling the heavy head of the machine as it fills the wheelbarrows with concrete. 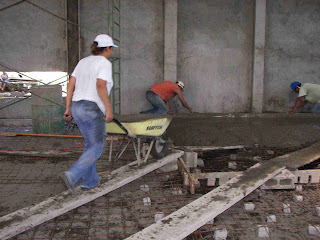 Sara, Mercedes, Janneth, Xiomara, & Rosa cart concrete – they fill wheelbarrows with concrete and wheel them over to th 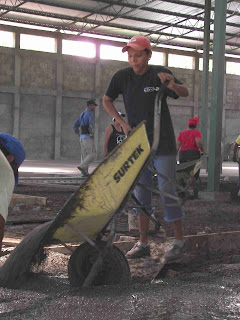 e section being poured, up a board and dump them into place, all without letting it dump over before its destination. These women are all moms in their 30s and 40s, strong women with lots of responsibilities. 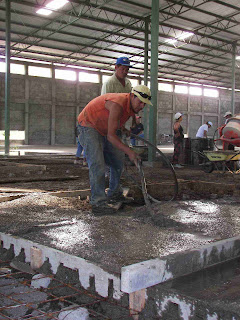 The four hired masons level off the concrete as it goes in each section, and then spend all afternoon working on putting the fine finish layer on 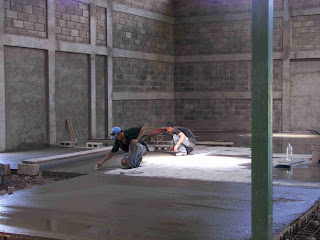 These folks have been working like this 5 days a week for 7 weeks. Can you imagine? They will be finished by the end of October…they will be beyond exhaustion by then, but you can bet they won’t be too tired to celebrate! – Becca

Posted by Center for Development in Central America at 12:07 PM