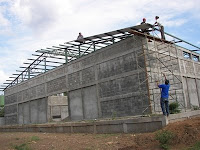 Yesterday afternoon, the Genesis co-op began roofing their building – this is such a huge step for the co-op. Members talked with students from Bucknell University who are working with them about how excited they were, how relieved, how now it felt like their dream is becoming a reality.

It’s a particularly bittersweet moment for the folks at Genesis, because it comes at a time with the co-op is struggling internally with differences among co-op members, and they’re not yet sure what the result will be.

After the Cone Denim factory shut down in April, a few of the Genesis members began to doubt that the cooperative would ever be operational – with the economic crisis worldwide, if the largest textile plant in the country can’t make it, how could a small co-op like Genesis ever have a chance?

At that time the co-op had stopped construction to have a serious of organizational meetings within the co-op, sorting out legal agreements, powers of attorney, and bank accounts. During those meetings some members began to say that the co-op didn’t have a chance of making it – and they were persuasive. Other members began to lose faith in the project.

After weeks of dealing with differences among co-op members, the folks at Genesis are worn out and saddened. There are now there are two groups within the co-op: 1) those who want to get back to work on the construction and move forward and 2) those who want to dissolve the co-op (and expect monetary remuneration for their work, which is a real bone of contention). The first group has the majority.

Genesis has made the very wise decision to try to work out its differences through mediation carried out by INFOCOOP, the government office in charge of cooperatives. Yesterday both groups attended mediation, but were unable to resolve their differences. They are now in a process of presenting arguments and evidence to INFOCOOP, and then that body will make a decision as to how the co-op is to move forward.

Rosa, one member of the co-op who wants to move forward, told the class from Bucknell University yesterday “we have followed the law, we have tried to allow everyone to express their ideas and tried to respect one another throughout this process. Now we want to move forward.” 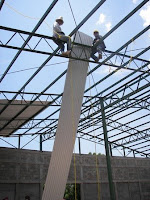 This morning Rosa was twenty feet in the air with her compañera Jamileth, passing sheet metal up to put the roof of her cooperative. Rosa and Jamileth believe in their project, and they are doing what it takes to make it become a reality. “I’ve lasted more than two years here,” Jamileth told the Bucknell group. “And we’ve got to get this building up this year and get to work, because to be honest with you, I don’t think I can last another year working without pay. I keep telling my kids ‘I don’t have anything for you now, but by Christmas we’ll be working and I’ll buy you a really nice present.’”
Posted by Center for Development in Central America at 4:13 PM

When we began to work with the El Porvenir coffee co-op in 2001, one of the problems the co-op asked us to help them resolve was their water problem. The co-op, with 43 families is perched on the top of a hill, has little access to potable water for its 286 people. 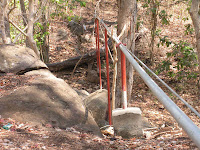 FINALLY, last week Rogelio, Pedro, Rito -- the electrician -- and our volunteer coordinator, Ben, went up to El Porvenir to test the water system which pumps water from the co-op well UP 3 kilometers (with a 300 m rise!) to the co-op. The pipes were flushed out from above and below, then reconnected, and the guys went to the bottom of the mountain to turn on the pump. It didn’t start.

The switch was faulty, and luckily Rito was able to disconnect it and wire it directly to the breaker. Since there are no telephone land lines and unreliable signal for cell phone communication, those at the bottom of the hill used a little appropriate technology and flashed mirror signals (we couldn’t make this up if we tried!) to the folks at the top to let them know the pump had been started, then the top of the mountain flashed a mirror back to say they’d started timing the process. After watching the pump’s pressure, they began walking the line back up the hill, checking for leaks and wondering if there was water at the top yet. 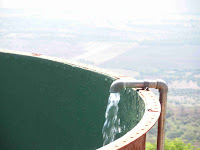 About two thirds of the way up the hill, Ben’s cell phone suddenly got a signal and a call came through. It was Felice from the Gettysburg-Leon sister city project which participated in funding this project along with Pangea Giving and Bucknell students and engineers. When Ben answered the phone, Felice – who was two hours away in León – said “Congratulations! The engineers at Bucknell were so pleased to know there is water at the top of the hill!” René, the co-op’s vice president, was at the top of the hill with cell phone reception, and when the water hit the top of the hill, he called Mike at the CDCA in Ciudad Sandino to let him know. Mike called the engineers at Bucknell in , who called Felice in León. Felice then called Ben and was the first to tell those on the ground that they had running water up at El Porvenir!

Thanks to a whole lot of work from a lot of people, the folks at El Porvenir now have reliable access to potable water…something which will make a huge difference in the everyday lives of these folks, especially in their health. -- Becca

Posted by Center for Development in Central America at 1:53 PM