When I arrived at the Genesis chilamate tree at 2 AM, all 18 co-op members were already gathered under its branches, holding hands to form a circle, heads bent in prayer. 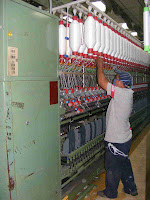 And then we were off to El Salvador to see a real working spinning plant! We had managed to convince the Interamerican Development Bank to finance a trip for all members of the Genesis co-op to visit the factory in San Salvador that purchased all our organic cotton this past year. The owners of the plant had agreed to show us around so that we could all see how a spinning operation works, an important precursor to training in spinning production, and something that we could do while we wait for results from the lawsuit against Coker International and equipment.

But more importantly, the trip was meant to boost the low morale of the Genesis members, give them something to focus on and look forward to, and – if they were thrifty with the per diem they were given for the trip – a little extra income. 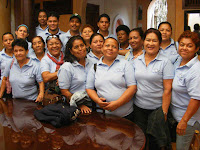 During their preparations for the trip co-op members voted to spend some of their per diem to purchase polo shirts with the monogrammed Genesis logo and each member’s name embroidered on the sleeve. To you or me, the shirt-buying might seem like waste of precious resources, but it was symbolic for co-op members. When Jamileth showed up at her extended family’s home and showed them her two Genesis shirts, their response was, “Wow, so you really do have a business.” And the monogrammed uniform shirt proved it.

For others, the fact that we were finally able to arrange the trip to El Salvador was in itself significant – former co-op members had gotten wind that a trip was planned and said, “That trip is never going to happen, that’s just the gringos telling more lies to manipulate you.” When we bought the bus tickets for the 12 hour journey north, Genesis members practically blew raspberries in the faces of the naysayers – it felt good to be doing something concrete and big after so long waiting around! Sara overheard her mother – who has been worried about Sara wasting her time at the co-op when she’s sure equipment will never arrive – bragging about her on the telephone. “Sara has a trip to El Salvador now, her business is up and running and this is just the first trip of many, nothing can stop them now!”

It was the first time out of Nicaragua for most co-op members, and many who had never even seen the north of Nicaragua watched out the windows in fascination as we headed up to El Salvador. I think everyone was scared – of leaving their families, of going so far away, of being in an unfamiliar place. I know they missed home, I know many cried themselves to sleep at night. But they shared food, drink and cell phone minutes with one another, and in the morning everyone was in the lobby of our hotel at 6 AM, showered and dressed in their monogrammed Genesis shirts, ready to head to the factory. 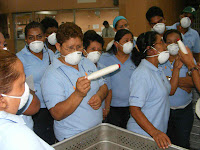 The plant manager himself met us and not only showed us all the different sections of their (97,000 sq ft!!!) spinning factory, but gave us extensive information specific to the spinning process as well as general business advice (“It’s easier to prevent a problem than fix one.” “Time is golden.”). Everyone was awed, practically tripping over themselves as they walked around open-mouthed filming the factory with their cell phone cameras.

Our host was kind enough to answer our endless questions and when the Genesis folks began to say, “It looks like we’ve got to go expand our building,” he kindly replied, “It’s all about scale. Everyone has to start somewhere.” He then told us the story of how their factory was started 30 years ago in a space the size of the Genesis factory, and how over the years it has grown to include a whole complex of several city blocks employing 1,230 people. The Genesis co-op was much encouraged by that story. And when we met a 98 year old woman who started work there 30 years ago and is still employed (as a greeter at the knitting factory), the older women of the Genesis group rejoiced, hugged her within an inch of her life, and all had their pictures taken with her. 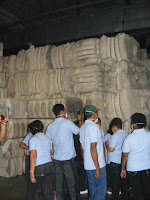 One of the most helpful parts of our trip was gaining an understanding for the entire textile process. The Genesis folks had already met some of the technicians from the Salvadoran plant when they came to Nicaragua to teach them how to inspect the cotton for polypropylene contamination, but while in El Salvador they were able to see why that inspection was important. We were also able to see our wobbly, loose-packed bales of Nicaraguan organic cotton next to the neat, tightly packed bales of cotton imported from the U.S. and see firsthand why that causes problems in the spinning plant (the Salvadorans have offered to help check our baler to see how we can increase its packing pressure). Seeing the spinning process allowed us to put a mental picture and process to the machine names we’ve heard for so long. On our last day there we were able to see the knitting and dying factory, which allowed us to understand why determining color and characteristics of the cotton to keep different lots of yarn separate is important to the end product. 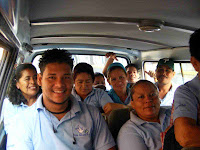 We were able to squeeze in a morning of sightseeing around San Salvador (learning about Archbishop Romero, first trip to a real art museum) and an afternoon at the beach eating shrimp cocktails, which made it seem like a real vacation for the Genesis folks. Still, when we crossed the border into Nicaragua, everyone breathed a sigh of relief. “Even if I get lost now, I can still find my way home!” Geovanny told me.

There were many wonderful moments during our trip to El Salvador, but one of the best came at the end, when the Genesis members all began calculating what they could do with money they had left from their per diems.

Jamileth waved her leftover cash at me and said, “With this, I’m going to buy a washing machine. I’ve already found a deal on new ones at the market.” Imagine what Jamileth and her daughter can do with all the time they’ll save once they don’t have to wash the family’s clothes by hand all weekend long. 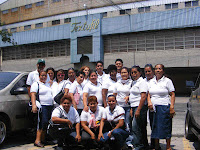 Ramona’s mother celebrated her 95th birthday the day we got back to Nicaragua. “I’m going to buy a toilet and have it installed in the house,” Ramona told me. “That way my poor mother won’t have to go out to the latrine in the mud during the rains.”

So, was the trip to El Salvador a success? Absolutely. – Becca

Posted by Center for Development in Central America at 10:48 AM 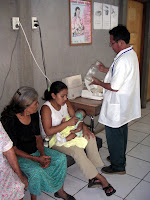 Breathing in and out easily is not over-rated! As an asthmatic, I can attest to such. And…

Many of the poor have trouble getting a good breath. Asthma plagues the poor. Women suffer from chronic asthma because they have stood over poorly ventilated wood stoves for most of their lives cooking meals for their families. Older women who have never smoked a cigarette in their lives have emphysema.

Children really suffer. In the dry season (six months of no rain) wind blows dust and dirt into their tiny little homes. As cars and horse carts drive by – or even children playing ball in the street – dust billows. Like women, smoke from the wood stoves in their houses puts impurities into their tiny lungs, but not only from the stoves… smoke from burning trash (like used toilet paper and leaves) also makes it hard to breathe. Now add smoke from burning trash in the Ciudad Sandino dump – located right behind Nueva Vida – and you have tiny lungs in crisis.

Our pediatrician does a great job caring for the children. Last year 76% of his patients were under the age of five and 20% were treated for asthma! With our renewed commitment to community health, word is spreading that the Nueva Vida clinic is filling a need with asthmatic children by giving comprehensive care.

In the clinic we have nebulizers going almost non-stop. Children are given expensive cortisone inhalers for long-term treatment when they need them (this is a rarity in clinics that serve the poor). Toilet paper rolls serve as spacers. Disposable plastic cups with an “X” cut in the bottom to push the inhaler through serves as masks for little ones to breathe in the medication.

Our general practitioner also treats adults with asthma. All patients are given follow-up visits to see how they are doing.

Now we are reaching out into the community. We have put nebulizers in the community in homes of health promoters who are willing to open their homes for asthmatic people to access the machines at night and on week-ends when the clinic is closed. We are working on ways to convince people to burn trash away from homes and ventilate their wood stoves better, but much of this takes funding as well as education.

Most of us take breathing for granted…oxygen is the element we need most consistently…like every few minutes! Helping children, women, and men breathe is helping to guarantee a basic human right, don’t you think? – Kathleen

Posted by Center for Development in Central America at 4:53 PM