Daniel's Story: "I love what I do"

Last week I wrote about a trip to the Managua Municipal dump, called La Chureca, with the delegation from , and our visit to the Los Quinchos Project, which works with the children of the dump, feeding them, teaching them, and giving them affection. When we arrived at Los Quinchos last Tuesday morning, there were already twenty children there. Several boys were bathing themselves in the small pool, laughing and splashing together. Older chi 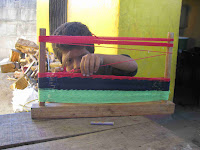 ldren are seated at wooden tables making woven bracelets and showing off the jewelry they make to the group. Younger children crowd around the visitors, hopping up onto laps and throwing their arms around our necks. One young boy is learning to weave hammocks sitting at a table. Looking out from the shelter of the Quinchos porch, I can see mountains of burning trash on three sides of us, literally as far as the eye can see. On the fourth side, below us, is a contaminated lagoon with floating with trash and algae.After a few minutes to look around, Daniel comes to speak to our group. A stocky young man with a brilliant and constant smile, Daniel was one of the first eight boys rehabilitated by the fledgling Quinchos organization 18 years ago. As children shout and call in the background, he tells us his story. 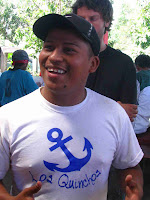 ed in a plastic tent with his family until Hurricane Juana in 1988. After Hurricane Juana his family had nowhere to live and no food, so he had to leave home. Daniel was six years old when he began living on the street. When the Quinchos project found him, he was living with a dozen other boys on the streets of the Mercado Oriental, ’s main market. Daniel was sniffing glue out of a baby food jar – “to make me feel strong, like the world was mine” – sniffing glue to give him the courage to rob people of jewelry and watches in order to survive…and also to ease the hunger pains. Zelinda Roccia, the Italian founder of the Quinchos Organization, met Daniel one day when he was getting high off glue in the market, and asked him and his group of boys if they wanted to leave with her. He went – to a farm the organization runs in the countryside. There he learned to play with the other boys, to plant food, to be with nature. “It was a paradise,” Daniel says with his constant smile. Later he went to school, learned pottery, carpentry, weaving, dancing. It was the dancing that most caught Daniel’s attention. In a few years he had formed a pop and hip hop dance troupe with other boys from Los Quinchos. They called themselves Enigma Junior, and what began as rehabilitation for Daniel soon brought them fame – they danced all over Nicaragua, on television, and ended up on a tour of Italian cities.

Today Daniel is 24 years old. He is the vice president of Los Quinchos – 40% of the 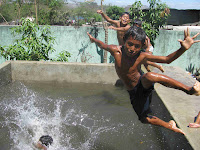 organization’s staff are former street children. Daniel now works at La Chureca with the children there, teaching them, helping them with homework, and doing home visits. He lives with his own two children – a seven year old daughter and one year old son. “I’m so grateful for all the help I’ve received,” Daniel says, “and when I see children on the street I feel horrible inside. I know what it’s like to be where they are. I love what I do.”

Posted by Center for Development in Central America at 1:00 PM

Standing in Solidarity with the Children of the Dump

A group of high school students and adults from has been with us this week. Like all of the delegations that come to the CDCA, the group has been learning about both by listening to speakers, and also through work: the students have been digging a hole for a septic tank with the folks at the Genesis spinning co-op. 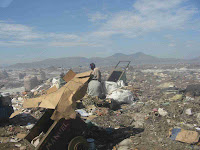 La Chureca is home to thousands of people – families who live off the trash of others: they not only sell the recyclables they find in the landfill (metals, glass, plastic), but they also make their houses from what they find (cardboard, plastic), they wear what they find, and they even eat what they find. La Chureca is a place on the edge – of the city (the trash is pushed into Lake Managua), and of society: the people who live there are in constant danger from the smoke and dust; from the garbage trucks and bulldozers which often run people over; from each other – theft, drug use, prostitution and violence are rampant; and from the trash itself. Several years ago two preschool age children, sent by their parents to work in the garbage, died when they ate chocolates they found that had been laced with rat poison.

In the midst of the dump is the Quinchos project, in a small house perched on the edge of a 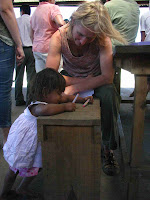 contaminated lagoon that works with the children of La Chureca, in particular working to rescue children who sniff glue. The Quinchos project at La Chureca feeds the children who go there a daily meal, teaches them to weave hammocks, make jewelry, helps with homework, teaches hygiene, bathes them, dresses wounds and gives nebulizer treatments for breathing problems, which are very common. Though most kids come for the food, those who will give up glue sniffing can often be moved to the Quinchos Filter House in Managua where they receive counseling, then on to the farm in the country, to a half-way house in Granada, and eventually back into society, where many of them work rescuing street children like themselves. Forty percent of the Quinchos staff members are graduates of the program, and in 18 years they have rescued more than 3,000 children from the streets of . 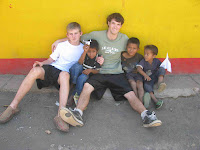 Today there are many children at Los Quinchos. The group colors with the small children, the kids at Los Quinchos love rough housing, making paper airplanes, showing off the bracelets they’ve made. Little Jocelyn physically latches herself on to one person after another: for many of these children, the affection they receive at Los Quinchos is more important than the schooling, more necessary even than the food.

And for the group from …what is the purpose of their visit to La Chureca?

We as human beings try to avoid pain – seeing another person in a desperate situation is a painful emotional experience for us, and we naturally want to avoid that. If we don’t have to look into the face of a desperately poor person and recognize them as fellow human beings, then we don’t have feel that pain of connection with them. Poverty robs the poor of dignity, of identity.

But when we are in solidarity 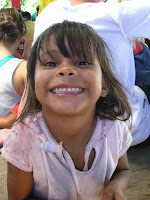 Posted by Center for Development in Central America at 9:58 AM

Genesis at Two Years: A Journey of Faith

Last week the Genesis spinning plant cooperative celebrated its two year anniversary. This was a bitter sweet moment for all of us: it is such an achievement to have made it through these past two years, yet at the same time we know that the hardest part lies before us – we still have to secure funding to finish the building and to operate; the 35 co-op members have been working all this time with no pay, and will have find a way to continue to do so for the foreseeable future 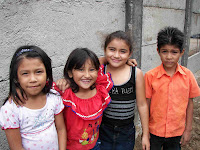 The last two years working with the Genesis project have been a real faith journey for us at the CDCA as well as for the co-op members. We started the co-op with no funding for the building or machinery at all. We just knew that this project had to happen and that we would find the money somehow. We have not been disappointed. Over time, the money has trickled in, mostly from individual donors. To date, we’ve invested more than $130,000 in the building. It’s been a long struggle to get the co-op started, and we are excited because it looks like we have found funding for the purchase of the machinery. Unfortunately, we are lacking $100,000 to finish the building. We find ourselves in a predicament: no organizations want to finance the machinery until the building is finished, and none want to finance the building unless we have guaranteed funding for the machinery.

This is why we have decided to ask individuals to loan the CDCA the needed money, because most of the funding for the building so far has come from individuals in small gifts. The members of the Genesis spinning co-op have risked what they have – two years of their labor and time – because they have no money. 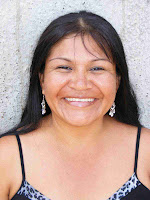 Leticia Lacayo is a member of the Genesis co-op. As a single mom and sole supporter of her family, she can’t afford to work all day without a salary. So for the past two years she has risen before dawn each morning to make and sell bread from her bicycle, arriving at the co-op around 10AM and working through the afternoon. Leticia doesn’t have anyone to look after her two children, so when they’re not in school they ride in her bicycle basket while she sells bread and play under the trees at the co-op while she works construction. Leticia cannot afford to give up on Genesis. “I want to be a great businesswoman…owner of our own business, to offer employment to people who need it, have a salary with dignity that meets all our needs. We have to aim at an elephant in order to shoot an elephant. We have to think big.”

Now Leticia and the other members of Genesis need investors with patient capital and long term horizons to think big with them. That’s what we mean by shared risk: they have risked their families’ futures in a way that most of us cannot imagine, and now they need other people to take a risk by helping finance their project.

If you know anyone with “patient capital” willing to invest with the poor, we are looking for folks to lend money to the CDCA’s Shared Risk Investment Fund for 5 years at 0-5% interest. Please have them write us at jhc@jhc-cdca.org

Posted by Center for Development in Central America at 10:42 AM