Paul and Becca will be speaking in in April about the CDCA’s work! Below is their schedule, if you’re in , please come hear us speak! If you are interested in hosting them or have questions, please write to: Becca@jhc-cdca.org. They will be traveling with a 20-25 minute power point presentation fair trade organic coffee and Slightly Twisted Spoons.

Posted by Center for Development in Central America at 10:11 AM 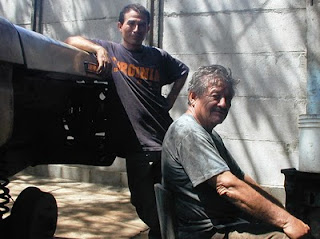 Enrique Carcache, our mechanic, died this morning around 4:00. We think he had a heart attack, but he did have pneumonia and a kidney infection. He had only been home a few days sick. It was quite sudden.

Enrique - for those of you who have been here - was Maestro's son...from back in the good old days. He and his dad would frequently come fetch us when our trucks died...they would drive by in their jeep with no brakes and stop by slowing down, then Enrique would jump out and put a rock under their tires to aid us. Many years ago, he and Maestro quit working for us and started a shrimp farm with a micro enterprise loan. The farm didn't work out because it was flooded by Hurricane Cesar. After working so hard and losing it all AND...after being in an accident when Maestro broke his back...they came back to work for the Center. Enrique came to work as his father's muscles and he learned his father's expertise with motors. 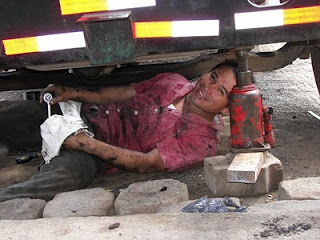 Enrique came on as our only mechanic. He drove our bus for delegations. We would laugh at how if the groups sang too loudly he drove faster to get home. He kept up all the mechanical work including throwing diesel in the carburetor to get the motor to turn over. Enrique would drop everything, come and fetch us where ever we were...like a knight in shining armor...in a run-down truck.

Enrique helped with other things as they came up as well....the sewing machinery in the sewing co-op during the early years, the bio-diesel project, pouring cement (including recently a sidewalk for my parents so they would not trip at night), digging holes, and learning about the spinning machinery.

It is hard for us to believe he has died...or it is for me. I just can't believe he won't be back with oil on his jeans crawling under the vehicles or inside the motors. He was patient with me and my non-existent Spanish when it came to sounds vehicles should not be making. He still called me Angelita, a name that I am losing as we hire newer staff. He would come in with the keys and with my questioning look would say to me "esta bien" (it's okay)
"Verdad?" (really?)
A huge smile..."verdad" (really).
Today "no esta bien...verdad." (it is not okay...really.)
-Kathleen
Posted by Center for Development in Central America at 3:11 PM 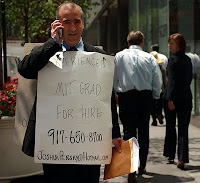 With unemployment in the at more than 10%, people are scared, being told by the experts that if we don’t protect Wall Street, “we’ll be fighting for rat meat on the streets.” Wearing the glasses The Market has given us, we mistrust ourselves, deferring to The Market, and blindly following where it leads. But as Joseph Stiglitz says, in doing so, The Market is also shaping our society. Are we sure that what we want is the way The Market has been molding us?

Since 1970, total worldwide production has tripled. Conventional wisdom tells us this means we have tripled our wealth and well-being. But behind those numbers is another truth: Over the last two decades, incomes of most American 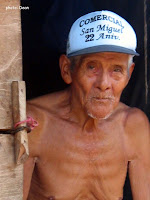 s have stagnated while we’ve been told to continue to consume as if there had been an increase! So if we’re not any better off, who’s getting all that money? A recent United Nations study found that the richest 2% of the world's adults own 51% of all global assets, while the poorest 50% own only 1%.

That’s not the world I want, and I bet it’s not the one you want, since neither of us is in that top 2%. In fact, we want the exact opposite: statistics are now showing that communities without large gaps between rich and poor are more resilient and their members live longer, happier lives.

How do we get to the world we want? Many economists are now saying something that actually makes sense to me: we need to change the priorities of our economy. David Korten recommends three steps:

1. Turn from money to life as the defining value, from growing financial capital to growing living capital, and from short-term to long-term investing;

3. Reallocate resources from supporting institutions of domination to meeting the needs of people, community, and nature.

This is already being done in a myriad of ways: making the decision to live on less and spend more time with your family, or doing summer-time veggie shopping at the local farmer’s market instead of the supermarket. On a larger level, people are supporting local currencies like Ithaca Hours and campaigning for state-owned banks.

One of the ways the CDCA is working to shift these priorities is through the creation of the Vida Fund.

..our shared risk investment fund that is partnering with worker-owned cooperatives like the Genesis spinning plant to help create steady, better-paying jobs for poor Nicaraguans. The Vida Fund provides nurture capital: long-term, low-interest loans that the co-ops can realistically pay back. The co-op members risk their labor – in the case of Genesis 1,500 hours each of unpaid work over 3 years – with the hope that their cooperative dream will become a reality. Through the Vida Fund, investors match that risk…effectively reallocating their resources to meet the needs of people and communities.

reinvest in the community. These buyers know the faces of the producers, have met their families, and are re-introducing the idea of trust and personal relationships into business.

With enough projects like the Vida Fund, community-based economies will become the norm, and mutual trust may then become the expected business norm, giving us a very different economic system, one that has priorities other than making a killing…priorities such as making a living…for everybody. That is how the other 98% of us can become rich, in the true sense of the word. – Becca

Posted by Center for Development in Central America at 12:16 PM

Part II: “The chains on you are binding me, I can’t rest ‘til we all are free”

Last week I talked about the glasses that we all wear: the dominant ideas in the world that give us a particular focus through which to view everything and don’t allow us to see that which doesn’t fit with those ideas. For example, our glasses tell us that each problem we encounter is isolated, and not connected to other issues.

Now let’s take off the glasses, change our focus, and see a different reality: everything and everyONE is connected.

Here’s an example: how is the recent devastation of the earthquake in related to your grandmother’s antique mahogany table? How did deforestation play into so many deaths? The cutting of Haitian trees began under colonial rule with African slaves sent to clear the forests to make room for foreign sugar and coffee plantations. In 1804 after the first and last slave revolution in history, became the first independent nation of . In 1915, the US Marines invaded the country and stayed for 19 years, controlling the banks and government before setting up a proxy force and a series of dictatorships to maintain US interests. (Meanwhile, a nearly identical history was happening in Nicaragua.) Forced deforestation continued in the 1940s during Rejete, the anti-Voodoo campaign when the Catholic Church gathered whole communities at gunpoint and forced them to watch their trees burn to prove that their Gods were not in nature. The campaign also served to clear peasa 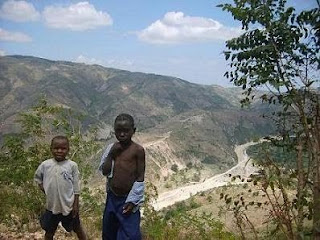 nts off lands US companies wanted for agriculture by destroying the Haitian people’s spiritual roots as well as their sources of income and food. Throughout this history, foreign companies benefited from deforestation by exporting tropical hardwoods to make high quality furniture, including your grandmother’s table. Due to such heavy deforestation, ’s soil eroded, and the country was unable to produce its own food, so its people went hungry. Haitian peasants had no choice but to seek a living in the cities, building shacks packed into places like …shacks that fell down on top of them and added to the hundreds of thousands of deaths in the January earthquake.

Through this example, we can see that seemingly disparate problems are actually fundamentally connected. So where’s the good news in all this?

It is when we take off those glasses and begin to see the depth of connection all around us that we understand that our world is a very small place. We begin to see the role your grandmother’s antique table played in the deforestation of which pushed people into the inadequate housing in that collapsed on them in the earthquake. When we understand that we our fates are already connected, then we can join hands to work together for the world that we all seek.

“The only chain that we can stand is the chain of hand in hand, keep your eyes on the prize, hold on.”

Thanks to Frances Moore Lappe and Anna Lappe and their book Hope's Edge for many of the ideas in this series of posts. -- Becca

Posted by Center for Development in Central America at 1:05 PM