Look at these pictures and reflect on how you feel:

When Coury, our son, was in Secondary school he wanted to be a Symbologist.  He was fascinated with symbols, especially dragons.  Assuming that real dragons never existed, they still found their way into art and lore across the world and had drastically different meanings depending on the culture.

Symbols are powerful.  Before Seminary I wore a cross, to remind myself that Jesus died for all. 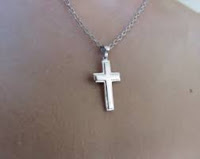 While in Seminary I learned what dying on a cross really meant.  I realized that it was method of state executions of the Roman Empire.  It was murder in a most cruel fashion of both the innocent and the guilty; and suddenly, I felt like I had an electric chair or gas chamber around my neck.  The cross went into my jewelry box...not as a lack of faith, but a change in its symbolism for me.

My wedding ring...a simple band...is a symbol of my love and

commitment to Mike.  I know if I should lose it, my commitment would not change.  Like the cross necklace, the ring is just metal, though dear to me.  I also know dear or not, I would not risk my life or even my finger to protect it ...it is just shaped metal.

And this understanding is what - I think - many people are lacking.  Flags are cloth...symbols yes, but cloth.  The hijab and the burka are cloth...just like thong bikinis...only more of it.  Beards are hair...and as a friend told me when I dreaded cutting Coury's baby hair for the first time..."Kathleen, it is just dead protein, get over it."

Add to that... there is the important fact that we keep forgetting: meaningful symbols for one group of people can become symbols of hate for others.  What was once a precious symbol, can suddenly be used to incite hatred...even murder and mass genocide. 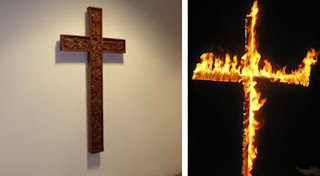 We have to guard against this hatred that allow symbols be greater than the children of God. 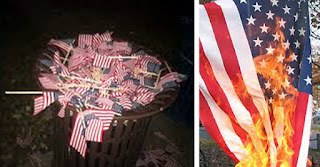 When flags are burned, it is not the act of destroying the flag that really offends people, because we throw flags away all the time.  It is the fear and uncertainty when we realize that others hate our nation...ergo us.   And many of us respond with fear and announce how bad these people are; instead of asking "WHY do they hate us?" and  "How can we change that hate and become friends?"  Not only is it more productive, it is also faith-based.

Guarding against bigotry of those who are different from us...guarding against the fear of their symbols or even worse using those symbols to mark them for death...this vanguard could be our work and our calling as children of the Divine...in other words we could just be plain decent human beings. 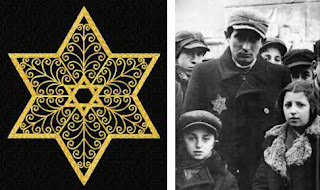 On-line, on television, and even with those I love....I hear and see hatred pouring out regarding people of color and people of different faiths.  Sometimes it is out-and-out, but more often it is insidious.

I even hear the fear and hatred in churches...I once actually heard a pastor warn against being tolerant of people different from Christians.  If he had gone on to say "Don't be tolerant.  Be more.  Be loving"...Jesus would have been proud, but the preacher did not and - I believe - Jesus' heart broke.

I heard one of Obama's last interviews on 60 Minutes.  When asked "For what do you think you will be remembered?"  Obama listed some of his achievements, but - I think - he knows but will not say...he will be remembered most for being the First President of the United States of America who was a person of color.  Look at those two photos.  He was definitely not the first Black man in the White House...

Symbols.  They can stir passions of love and hate as well as respect and fear; but mostly they are made of things.  People are much more important and THAT is where our energy must lie.

Posted by Center for Development in Central America at 2:45 PM