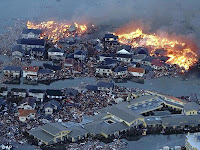 In light of the earthquake and tsunami in Japan, Nicaragua watches and mourns with the Japanese. In the 20th Century, Nicaragua experienced one major natural disaster every two years.

people and left another 250,000 homeless, many of whom were relocated to Ciudad Sandino as refugees. Another, Hurricane Mitch, left 11,000 dead in Honduras and Nicaragua and another 2.7 million homeless – many of those were again moved to Ciudad Sandino and the huge barrio of Nueva Vida was started with those 1,200 families. Nicaraguans feel the Japanese pain.

We watch as Japanese pick through the rubble that represented much of their lives. Whenever Nicaragua gets too much rain (at least every two years) we see people here picking through the remains of the little they had.

We watch and as a nation pray that Japan’s nuclear reactors will not fail more – because as a nation that has been knocked down over and over again – Nicaraguans understand one blow after another after another.

We feared the tsunami would hit the Nicaraguan Pacific coast hard, which would be devastating

– even a small one would wash away poorly built houses on stilts or shacks made from plastic and flattened metal barrels. Luckily, the tsunami had lost strength by the time it reached our coast, and did no damage.

The horror in Japan is – well, terrifying, completely overwhelming, and heart-rending. But I think if it had happened to a Third World nation – with buildings not built for earthquakes, no warning systems, and no real capability for rescue and then relief – then how much more horrific would it be?

Nicaraguans care because they understand. We can learn much from our brothers and sisters who know natural disasters. – Kathleen

Posted by Center for Development in Central America at 2:31 PM