My Week as a Migrant Coffee Picker 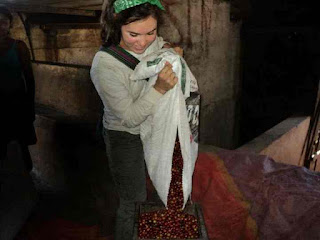 The morning cup of coffee is a mindless act – you can brew a pot in your sleep. We don't tend to give much thought to what it took to get that rich brown brew that brings us to life every morning. I recently spent a few days with our friends up at the El Porvenir Coffee Cooperative to gain a better appreciation for my favorite caffeinated concoctionby joining in the process of hand-picking the beans. I also used it as an excuse to spend some more time up there, as I usually only make short visits while herding volunteers.

For 150 years coffee has been essential to Nicaragua’s economy. In the 1980s the coffee crop accounted for 40% of Nicaragua's foreign exchange earnings but thousands of farm workers fled or refused to work in the fields for fear of Contra attacks. The Sandinista government worried 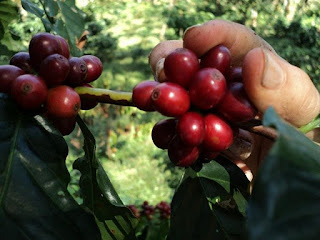 that the country would lose part of this valuable crop due to the shortage of coffee pickers and so they ordered a mobilization of high school and college students to join the remaining peasants in the field to pick the coffee. Workers were often accompanied by armed soldiers to guard them as they worked. Working alongside peasants to bring in the coffee crop created a revolutionary consciousness in these young people as they learned about life as a peasant and gained respect for farm labor. In December, I set out to follow in their steps to appreciate the way of life in the countryside and my morning cup of joe.

Up at El Porvenir, everyone joins in the harvest in December and January, which even brings in migrant pickers from outside the community. The coffee beans ripen at different times so one plant will have to be picked more than once. The coffee beans start out as a juicy fruit, often called cherries in English and uvas (grapes) in Spanish. They have a thick grape-like exterior that tastes like a bell pepper. This protects the two green bean halves which are covered by another slippery membrane. All the pickers are assigned to rows of plants and are instructed that all the red berries "van de viaje" (are out of here!) and to leave the green ones on the branch to ripen until the next picking. Wearing a large basket around my waist, I learned to pluck the ripe berries off the branch and drop them into my basket.

I picked until my basket was full (or more likely until I was nervous that I would spill it on the ground for the 3rd time) and then emptied the contents of the basket into my sack. Later they measure the picked coffee in “medios” which is equivalent to 5 gallons.Those berries are then processed to separate the bean inside from the fruit, which means a medio of coffee berries yields only a fraction of that amount in green coffee beans. 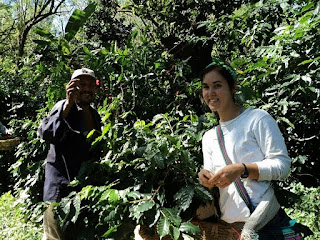 I picked 1 medio and 1 quartillo (1.5 medios) each morning that I worked; an unimpressive amount, but I was a beginner! The picking itself is not particularly difficult but some plants are tall and unruly and it takes some finesse to get to the highest berries without hurting the plant. Luckily the plants are fairly flexible so I could grab a tall branch and pull it down to me.

I was shown the ropes by one of the members of the cooperative, nicknamed El Palomo (the pigeon,) who was responsible for assigning the rows to the pickers and keeping an eye on them. Several times El Palomo reviewed the plants I’d picked, pinching off the berries I missed and tossing them into my basket. I later joined a group of teenage boys and we became a picking team. We called ourselves “mara la pana” – the basket gang. They would frequently “gift” me a plant that bore a good amount of ripe fruit to help me fill my basket and break the previous day's haul. 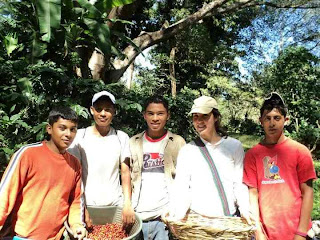 I did not prove myself to be a very helpful farm hand but really enjoyed myself in the fields and in the community. I almost forgot I was doing manual labor and was often distracted by the tropical beauty of my surroundings, Caturra and Bourbon coffee plants growing under a canopy of banana and Guanacaste trees atop a volcano range. The best part was picking side by side members of the community, joking and singing as we worked. Everyone was so kind and encouraging to me, their gringa migrant worker. I gained not only more appreciation for those tiny beans I percolate into my favorite beverage but for the kindness of Nicaraguans I’ve met this past year like the community of El Porvenir.


For those of you still needing a 2012 calendar, our former Volunteer Coordinator Eric Gruen is selling a 2012 calendar of his photography from El Porvenir – which can also be bought with a pound of hand-picked, organically grown, fairly traded El Porvenir Coffee – all proceeds to the CDCA! http://www.peacephotography.org/ -- Liz Haight

Posted by Center for Development in Central America at 2:02 PM