Nicaragua’s response to COVID-19 has been coming under criticism by the international media.  I thought that we should explain just some of what Nicaragua IS doing* to address this pandemic.


The Ministry of Health (MINSA) holds daily announcements regarding COVID-19.  They sent out tens of thousands of lay health promoters to teach people about the virus, how to prevent it, and what are the symptoms.  In one week, these volunteers went to 1.2 million homes (Nicaragua’s population is 6.8 million).


With universal health care, patients are encouraged to go see a doctor if they have symptoms.  And because they do not have to pay for a visit, they are more likely to go.  Our clinic sends all patients with fevers and respiratory issues to the public clinics.  The nation has seen less respiratory illnesses this year in general, probably because they now have vaccines for influenza and pneumonia.

With the World Health Organization’s help, Nicaragua opened its own modern molecular biology laboratory for testing for diseases.  In this lab they can and do test for COVID-19.

The day after it was reported that three died in China from COVID-19, Nicaragua released an epidemiological alert. Ten days after the alert the Nicaraguan Inter-Commission Committee working closely with the WHO had a plan… proper protocol, communications, etc.  This plan is updated as new information comes in.

Nicaragua has 19 hospitals (18 opened during this administration’s terms of office) standing ready to treat COVID-19 and 100 Cuban doctors standing by, as well as Nicaraguan docs.

Nicaragua has solicited aid from Cuba, the People’s Republic of China, South Korea, and Taiwan and is receiving expertise, medicines, and Personal Protective Equipment.  Taiwan has handled their outbreak amazingly well and Cuba has some of the best infectious disease doctors in the world.  Cuba is giving Nicaragua thousands of doses of Interferon Alfa, a medicine that is an immune booster and which combined with other medications helps COVID-19 patients. In turn Nicaragua sent 600,000 influenza vaccines to Cuba.

Nicaragua is NOT shutting down and for this, the leadership is receiving lots of criticism from the international press and opposition political parties.  Currently, Nicaragua is handling COVID-19 much like Sweden.  Despite what the international press reports, there are not marches or large gatherings in the streets.  The last pro-government gathering was held on 17th March when Nicaragua had no cases.

The public schools are still open because most of the student population is from families that are impoverished.  Schools teach hygiene during this pandemic. There are no computers or tablets or Wi-Fi to permit study from home, and the children get food at school.  BUT if parents keep their children home, then teachers provide guides for study so they won’t get behind.  About 1/6th of Eibhlín and Orla’s schoolmates are going to school.

A little more than 70% of people working are employed in the informal sector, which means they do not get paychecks nor do they have bank accounts.  They are vendors selling in markets or at stoplights or in a little lean-to on the sidewalks.  If they don’t sell, their families don’t eat… and – I mean – they do not eat at all. 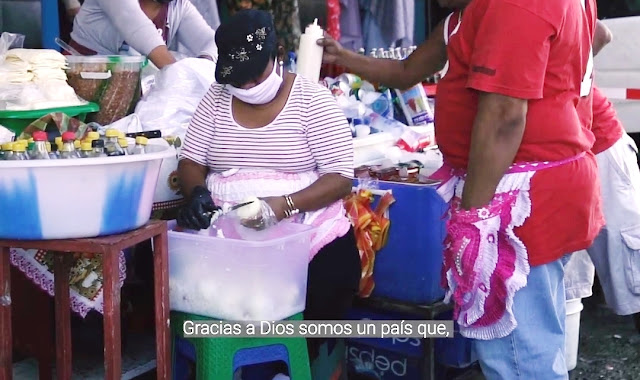 Businesses are open to the public and many have guards with hand sanitizers at the door and some even with thermometers.  Many, many people wear cloth face masks.  One bus cooperative even put tanks of water on top of their buses with pipes going down ending in faucets with soap for all passengers getting on the bus.  The general population is listening to their government.  Why?


The vast majority of Nicaraguans trust their government, despite what you might be hearing or reading.

Since the political unrest of 2018, the economy has been trying to recover and was recently beginning to make strides in that direction, but now, like the rest of the world, the economy is falling further behind on recovery.

Nicaragua is the second poorest country in the Western Hemisphere… there is no government money for big or small business bail-outs, and no money to help already impoverished families with their costs.

Added to that, the poor live in small houses with sometimes 10 or more people crowded in… grandparents, aunts, uncles, children and grandchildren.   The extended family is more commonly the “nuclear family” in Nicaragua.

NOTE: If you are reading this blog using the mobile version, click on "web version" to see the full blog with all the features including "subscribe to blog by email".
Please join us and also share on your social media.

Donate here to the ongoing work of the CDCA in Nicaragua:
https://donatenow.networkforgood.org/jhc-cdca

Posted by Center for Development in Central America at 7:00 PM