This article was first published in NicaNotes https://afgj.org/category/nicanotes

Since the announcement of the coronavirus pandemic in March, we have seen opposition media in Nicaragua quoting unnamed “extra official sources” and “informants” saying that there are many more cases of COVID-19 than the Ministry of Health (MINSA) is officially reporting, and these stories are being repeated by international media. Our organization, the CDCA, has been running a medical clinic in Nueva Vida, one of the poorest neighborhoods in the country, for more than twenty years. We coordinate closely with MINSA in that work, and have been coordinating with local health officials on COVID-19 and the current nation-wide vaccination campaign, so I can tell you a little about MINSA protocol and the way they report illnesses.

MINSA medical providers at health posts, health centers, and hospitals fill out pathology sheets to report what they are seeing in their patients, and MINSA uses those numbers to track illnesses nation-wide. Anyone who has ever been in a consult room at a MINSA clinic or hospital knows that the doctors have long pathology sheets with lists of common ailments and symptoms and as they see each patient they tick off any ailments that apply. The doctor seeing the patient ticks off categories of ailments - respiratory infections, ear infections, fever, gastrointestinal, etc., but these sheets do not have COVID-19 on them because it cannot be diagnosed in an office visit. Any disease that will need a laboratory test of any kind for confirmation is not listed, but rather checked off in broad category or by symptom complaints. Therefore, any patient with symptoms corresponding to COVID-19 will be listed on those pathology sheets as having a respiratory ailment. Pneumonia is a secondary infection associated with COVID-19, not synonymous with COVID-19, therefore any patient who is suspected of COVID-19 but also has pneumonia will in fact be reported as having pneumonia. 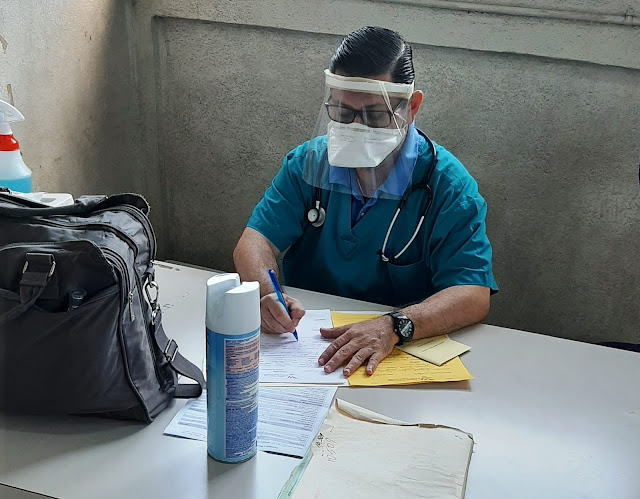 The MINSA protocol for the COVID-19 pandemic is this: each health center has one doctor in a separate room assigned to see patients with respiratory complaints. When the doctor suspects a patient of having COVID-19, the doctor calls MINSA whose staffpeople come out to pick that person up, and the patient is taken in for testing - this is important, because patients are not simply told to go to the hospital on their own (which they might not do, or would do on a bus potentially contaminating other passengers), rather the health center keeps them until MINSA can come get them. The doctors at the health center report on their pathology sheets pneumonia or respiratory problems or fever or whatever symptoms they saw in that patient.

It is true that MINSA has a centralized location for coronavirus testing, because as far as has been reported, there is only one laboratory in the country authorized to do the tests. It is that lab that then reports the number of positive coronavirus tests, and those are the numbers that MINSA reports in their daily press briefing. In addition to testing patients with COVID-19 symptoms, MINSA is also doing randomized testing of its own staff and of patients not reporting COVID-19 symptoms, in an effort to spot asymptomatic cases before they spread.

While MINSA is not reporting daily how many tests they have done overall, they do report the number of suspected cases they currently have in isolation. This is following the contact tracing protocol that MINSA has been using throughout this pandemic, which has been used successfully in other countries including Germany and Taiwan (Taiwan has been supporting Nicaragua’s anti-COVID-19 efforts). This particular protocol is now beginning to be adopted some places in the U.S., such as Massachusetts.* Contact tracing involves finding out with whom infected patients have been in contact, getting in touch with those individuals and testing them. The protocol then calls for quarantining people MINSA thinks may have the virus and hospitalizing sick patients. Nicaragua’s community-based health care system is ideally structured for this type of approach, as MINSA has tens of thousands of trained “boots-on-the-ground” health promoters around the country who can do follow up in their own neighborhoods to track down potential cases.

We saw this community approach in action in Nueva Vida earlier this month when dozens of people arrived back into the community from Costa Rica. When Nicaragua’s neighbor nation went into quarantine, many Nicaraguans working in the service industry there lost their jobs and wished to return home, but Costa Rica had closed its borders and they were unable to leave. So folks we know from Nueva Vida did as many others did – they crossed back into Nicaragua without passing border checkpoints, so MINSA had no record of them; therefore MINSA couldn’t follow up as they have been doing with people entering Nicaragua at immigration checkpoints. In Nueva Vida and around Ciudad Sandino, however, we know that neighbors have informed MINSA about people who’ve come from other countries without being registered, and MINSA has followed up with those people, asking them to self-quarantine for 14 days and calling to check on them regularly during that time.


Is it possible, as the “extra official sources” say, that there are more cases of coronavirus in Nicaragua than we know about? We know that many people with coronavirus show no symptoms at all, and of course if people aren't feeling that bad, or don't recognize the symptoms, they will not go in to the doctor, so there are surely cases that even MINSA doesn’t know about.

But is there a big cover-up in MINSA? Let's take into account what we are hearing from other countries: from the U.S. I am hearing directly from friends and family members who have all the COVID-19 symptoms, they have called their doctor who has agreed that the symptoms sound like COVID-19, but due to a shortage of tests and low risk for that patient, but they’ve been told just to stay at home. Therefore, we can assume that the number of COVID-19 cases in the U.S. is much higher than is being reported, but due to lack of testing, we don’t know exactly how many people have had it.

Similarly, if there were currently a widespread outbreak in Nicaragua, would we not be seeing, hearing, and reading about people with the symptoms who were told to stay at home or were refused tests? I've yet to see any reports like this, even from opposition media, which would surely be eager to print such a story.

To put this in context, the year that Zika virus hit Nicaragua, there was an alert and the government was reporting every day on how many pregnant women had Zika and when their babies were born if they were born with birth defects. Similar to coronavirus, because Zika was a new disease, no one had immunity to it and so it spread quickly through the community. BUT there was a shortage of reagents to test, therefore unofficially, tests were only administered to pregnant women or those with other conditions that made them vulnerable. My kids and I had all the symptoms, I went to MINSA and was told I had a rash and was not given a test (later I tested positive for Zika antibodies). I talked with countless others with the same story, including a family from the same house with two teenagers, and adult and a baby, and only the vulnerable baby was given the test. At that time, you could have asked in any neighborhood and everybody had a Zika story to tell.

Ask around now? Nobody has a coronavirus story to tell that hasn't been forwarded to them from someone who forwarded it (perhaps from an “informant”?) on WhatsApp. Maybe we should also consider contact tracing inflammatory messages before we forward them along.

NOTE: If you are reading this blog using the mobile version, click on "web version" to see the full blog with all the features including "subscribe to blog by email".
Please join us and also share on your social media.

Donate here to the ongoing work of the CDCA in Nicaragua:

Posted by Center for Development in Central America at 8:13 PM