Pulling Up by Your Bootstraps

Thank you all for yo 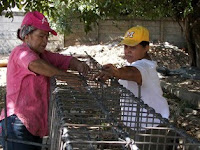 ur emails and calls to Coker International encouraging them to do the right thing. We are amazed at all the goodwill shown to Genesis. This whole debacle has reinforced in me what are the evils that capitalism birth on a regular basis.

Many in the States cannot understand why countries rise up. Why would they turn their backs on capitalism when so many of us think of capitalism and democracy as synonyms? Looking at Genesis, I understand.

Capitalism has at its basis greed. It also spreads the notion that if one just worked hard enough, put in enough labor, sweat, and time then one can pull one’s self right up and prosper. One just has to play by the rules and the system will work for you.

Well, first…there seems to be no rules. The JHC took out loans to pay the broker…to pay him up-front money. Loans with ridiculous interest and the broker took the money and didn’t play by the rules.

Second…these women and men have worked hard enough…harder than most of us ever have. They built their huge building by hand….by hand! No troughs for cement to slide down. Hand shoveling cement. Hand-tying rebar to reinforce the building. Digging and leveling with shovels. Hard…they worked hard. And they have no boot straps to pull themselves up with!

Oh! We hear how desperate “some” people feel in regard to money problems…problems 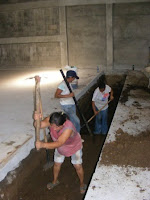 that caused them to not honor their contracts. They may not be able to go on vacation or even lose one of the many businesses they own…but they do not lie in bed worrying about the next day’s food….literally Food. For. The. Next. Day. Not next month. Greed.

The members of Genesis worked/are working incredibly hard. They have sweated. They have put in the labor. They have waited and waited. They have worked within the capitalistic system and played by its rules and where are they? Hoping that enough pressure can be put on the broker to do the right thing. This is not right. Not by any measure.

The poor are poor because others reap the benefits of their labor. This is why peoples rise up. Plain and simple.

Posted by Center for Development in Central America at 2:56 PM