Martha Arriaza, singer, songwriter and soul of the group Guitarra de Madera Azul died Thursday night after a long battle with cervical cancer.  There were tributes on radio, television, at her wake and at her funeral – Martha was well-loved.  She was the life of any concert, bantering and flirting with the crowd, endearing herself to all by mixing up songwriter’s names in her passion to talk about their music.  But when Martha opened her mouth and unleashed her voice, she sent chills of rapture up every spine in the room.


But cancer that killed her is all too ordinary.

Cervical cancer is the most common cancer in Nicaraguan women – two women are diagnosed in the country each day – and Nicaragua has more cervical cancer than any other country in Latin America except Haiti.  Of the nearly 100 pap smears we’ve taken at our Clinic in Nueva Vida since beginning our new cervical cancer prevention and detection program in November, 8 have come back with abnormal results.
***
In September– seven months after she’d been given six months to live – Martha told the crowd at a concert, “I have terminal cancer.”  The crowd gave a collective gasp.  Martha then raised her fist in the air and shouted, “But I’m still fighting!” The crowd went wild and Martha slung her kidney drain bag over her shoulder and gave an incredible performance.

But the cancer that killed her fought back.

No woman should die of cervical cancer.  If it’s caught early, it’s easily treatable.  It’s caught early by going for regular pap smears that are read quickly and with timely follow-up for abnormal results.  Most women in Nicaragua don’t go for regular pap smears, saving what little cash they can spare for health care on the children in their family.  By the time follow up is necessary, they’re too scared and too broke to follow up.  Poor women die of cancer in Nicaragua.
***
Martha knew something was wrong inside her body, but even her insistence to doctors that something wasn’t right only led to misdiagnosis and confusion for too long.  Her story is echoed in public hospitals across the country – when Martha finally got a pap smear and the abnormal results came back months later, she was told not to worry and scheduled for a follow up appointment months down the road.  Although Martha didn’t have many economic resources, her music and personality had endeared her to people high up – flowers at her funeral were sent from an alphabet soup of government institutions and big names.

Martha was loved by people with connections.

But the cancer that killed her couldn’t be stopped by all the connections in the world by the time she finally found out what was wrong with her.

In the public health system in Nicaragua, even women who discover their cancer early struggle to be treated in time.  While accompanying Martha in the final agonizing stages of her cancer, 8 of the 100 paps taken at the Nueva Vida Clinic in November came back abnormal, and it felt to us like referring those women – including one of the young moms from our new mother’s program– into the public system would be tantamount to throwing them to the wolves.  We looked for another solution, and were able to make a connection that did make a difference.  Just a month after going in for their pap smears, our health promoter Jessenia took those women in for directed biopsies and colposcopies.  In January they were all given a clean bill of health and scheduled for follow up exams in a few months.
***
Martha fought so hard because she couldn’t give up on the life she loved so much, and especially because she couldn’t leave her daughter whom she loved more than life itself.  At her funeral, Martha’s daughter Abril, who will be 11 next month, kicked off the musical tributes to Martha by getting up on stage and telling about her mom’s last moments.  Then she unleashed her own voice, and sent the street filled with people to its knees as she shared her private grief and evoked her mom’s public persona.  She told the crowd, “I’m going to follow in her footsteps.”

In the first world, girls of Abril’s generation won’t die of cervical cancer.

There is now a vaccine against human papilloma virus (HPV), the virus that causes cervical cancer.  Girls and boys Abril’s age in the U.S. are routinely vaccinated against HPV, and deaths from cervical cancer are now a rarity there.

The HPV vaccine still isn’t available in the Nicaraguan public health system, upon which the vast majority of the country relies.  The vaccine is available through private doctors and a bureaucratic paper trail, but the combined cost of the 3 necessary vaccines is $150 for one girl…a small price to pay for life, but still out of reach for most Nicaraguan families who would be lucky to earn that much in one month’s wages.  Keeping their daughters safe from cervical cancer is out of reach for most Nicaraguan families. 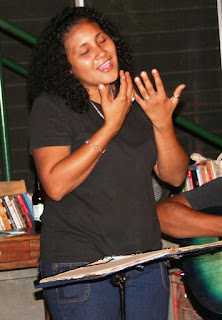 My heart is broken.

*During the Nicaraguan Revolution it was customary to shout the names of those heroes fallen in battle and after each name cry, “Present!” because the spirits of our heroes & martyrs live on in us.


Posted by Center for Development in Central America at 8:17 AM