What Happens When a Nation Faces Depression?

I battle depression and lately it feels like it might be winning.  I’m not the fighter I used to be.  I’m tired and weary to my bones, but yesterday I was shaken to my soul.

Being depressed makes it difficult for me to exercise. Being stuck in the house adds to my depression, but yesterday, I decided enough is enough and I needed to move… then… I read an article about a U.S. StateDepartment paper that was leaked  [RFTOP No: 72052420R00004 Responsive Assistance in Nicaragua (pgs 4-17*)].  The leaked paper describes the plan to destabilize Nicaragua, wreck the economy of Nicaragua, use the pandemic to cause chaos, pour money into the opposition to Nicaragua's government and use its U.S. influence to change the next election...and if all that doesn’t work, to then sponsor a coup.

Reading this article, my first thought was “I don’t want to live through seeing Nicaragua suffer again.”  I then stayed in our bedroom most of the day wallowing in self-pity.

Tomorrow I will write more on this 14-page leaked document*.  But today, I want to try to explain the depression that this country feels.

For decades before the 1980s, Nicaraguans lived under U.S.-sponsored dictators who were brutal.  In 1979, Nicaragua saw the end of those dictatorships after many years of insurrection. The new government did not execute those who propped up the dictatorship and had done horrid things like torture and murder, but rather gave them the option of jail time or exile.  Most - if not all - left and became the people to which the U.S. gave money, weapons, and training to wreak havoc and war on the new Sandinista government which was trying to lift the nation out of poverty with health care, literacy campaigns, education, land reform, community development, etc.

Kathy, Mike, Sarah and I came to Nicaragua in the '80s and saw hope among people who had endured so much pain and poverty even while they were at war.  But even with the hope, there was death and lack of resources from the economic embargo that the U.S. placed on this nation.

In 1989, the U.S. basically said, “Elect this person, Violeta Chamorro, or the war continues.”  The nation cried “Uncle” and fell into a pit of depression, which was when we moved to Nicaragua in 1994.  Gone was the health care system.  Gone was free education.  Gone was the hope.

For the next 16 years, Nicaraguans lived through fraudulent elections with the U.S. backing any joker other than the Sandinista candidate.  They got Pres. Chamorro elected, who allowed all the progress from the 1980s to die.  Then they got Pres. Alemán elected, who stole 100 million dollars of aid after Hurricane Mitch, the deadliest hurricane in the 20th century.  They got Pres. Bolaños elected, who kowtowed to the U.S. (the U.S. ambassador even campaigned with him).  The Sandinistas had been labeled terrorists by the U.S., and Nicaraguans were afraid that if they didn't elect the U.S. hand-picked candidate, the U.S. would invade as they did in Iraq. 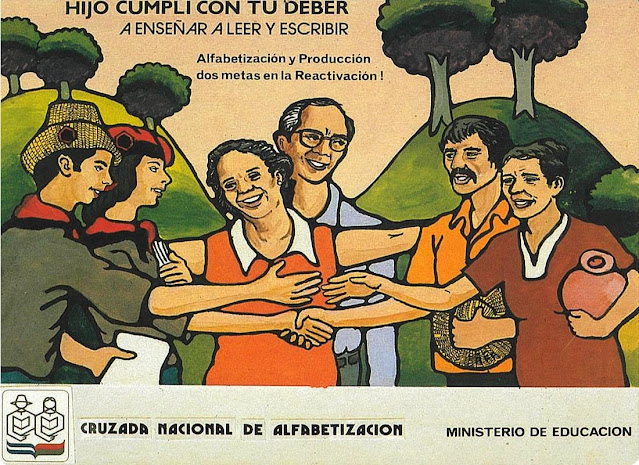 Finally, in 2006, Nicaraguans voted and were allowed the result of their elections, to put the Sandinistas back in the seat of power.  What happened then (and continues to this day)?  Education became free all the way through college, including medical or dental schools.  Health care became accessible to all.  Nineteen new hospitals have been built.  COVID-19 is being handled in a better way than in the States… that is for sure.  Clinics have opened all over the country, as well as opening homes for pregnant women at risk.  There are more schools, educational resources and teachers.  Businesses were finding Nicaragua a healthy place to set up corporations.  Renewable energy was prioritized.  Nicaragua was doing so well as a nation.

Then in 2018, the U.S. got a foothold again and help to fund uprisings, gangs to create chaos, and all the progress slowed to a crawl.  Since the end of 2017, U.S. AID has funded opposition to the government with at least $31 million dollars.  But after the initial unrest in 2018, things calmed again and the nation was slowly coming back.  Then COVID hit.

I have said many times that Nicaragua is like a battered woman.  She gets knocked down.  She gets up and all seems to be going better to be knocked down again when she doesn’t expect it.  And NONE of it is her fault, but instead the fault of the batterer who uses his power to dominate and get his own way.

What eventually happens to the woman?  She sinks into depression and is ever cautious and fearful of the next blow.  She loses hope, and will, though she is strong and a survivor.

Unlike the battered woman, Nicaragua cannot leave the Americas to find a safer shelter.

But like the batterer, the U.S. seldom changes its ways unless forced… and that is where the fight in me has to return.  I am a child of that batterer and I need to force it to change its ways.

*Original of the leaked document in Spanish on La Primerisima:

NOTE: If you are reading this blog using the mobile version,click on "web version" to see the full blog with all the features including "subscribe to blog by email".
Please join us and also share on your social media.
Donate here to the ongoing work of the CDCA with the poor in Nicaragua:
https://donatenow.networkforgood.org/jhc-cdca
Posted by Center for Development in Central America at 7:44 PM