New numbers are out regarding COVID-19 for Nicaragua.  The government posts each Tuesday instead of each day.  Nicaragua has had 2,682 confirmed cases; 2,282 recuperated; 301 active; and 99 deaths from the virus.  Of course, like with all nations, there are probably many more cases.  These are the confirmed cases.

Several members of my own family have been told by their doctors they probably have had this virus, given their symptoms...but were not tested due to lack of tests or the test came back with what is probably a false negative.  They all live in the United States.
In Nicaragua, the opposition is using this virus to erode confidence in this government - globally as well as inside the country.  The media coverage shown internationally depicts a Nicaragua that we do not live in - what you may be seeing and hearing is simply not the reality that we see daily.  Much of the opposition is getting financial support - millions of dollars - from my own nation, the United States of America, which is handling the virus in a completely backwards way.
We run a health clinic.  Several of our chronic care patients have died...probably from COVID-19 combined with their pre-existing conditions.  Our three doctors had COVID; two were confirmed, one was not.  Our health promoter is among the 301 active cases and is hospitalized.  She has diabetes and is on dialysis so this will be touch and go for her...please pray for her and her family.
But I have heard doctors in the States say they have had to tell their patients, "Yes, you probably have COVID, there are no tests. To care for yourself...[Do this and this] and if symptoms get worse go to the hospital."  And the States supposedly has "the best" health care in the world.
Unlike the U.S. where states have closed and then reopened, here Nicaragua has stayed open.  Businesses and government offices have maintained social distancing, disinfecting each patron before they enter and checking their temperatures.  Many people are wearing masks, but now that the virus cases seem to be going down, fewer are wearing masks.  (Note: There are uninformed and silly people worldwide.)
Some elderly women have closed their pulperias (little store fronts) because customers are not wearing masks.
Schools are staying open, but students can get on-line or receive classes via local television and radio stations.  This is an option if their families can feed them and care for them during school hours.  Channel 15 is broadcasting classes nationally for students.  Eibhlín and Orla receive their schoolwork by text, television, and on-line.  In school, students continue to receive meals, they wear masks, they disinfect their hands and feet before entering, and help keep the school clean.
Travelers coming to Nicaragua will now have to present a negative COVID result before entering, while the U.S.'s Immigration and Customs Enforcement (ICE) is deporting sick immigrants back to their countries and keeping people in close contact in cages. 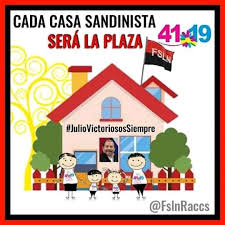 This weekend Nicaragua will have virtual celebrations of the anniversary of the Triumph of the Revolution.  Maybe people will gather in the Plaza as they do every year - usually upwards of half a million people go - but if they do, it is not at the government's urging. This year, the government will have no massive rally. Instead, they are pre-recording concerts and speeches for television, radio and social media, urging people to stay home: "Este año cada casa es una Plaza" (This year, every house is a Plaza).
Nicaragua is not the United States, our realities are very different, and what is good for people there and for people here are not the same thing. So why should we hold one country to the other's standard?
- Kathleen
NOTE: If you are reading this blog using the mobile version,click on "web version" to see the full blog with all the features including "subscribe to blog by email".
Please join us and also share on your social media.
Donate here to the ongoing work of the CDCA with the poor in Nicaragua:
https://donatenow.networkforgood.org/jhc-cdca
Posted by Center for Development in Central America at 9:30 PM