A pandemic changes everything. We knew that the 19th of July, Revolution Day in Nicaragua, would also be different this year, but we weren't sure how different. We'd been watching the build up to July 19th with televised virtual concerts all week. On the 18th, the traditional Eve of the 19th with hundreds of live concerts all night long was replaced with a televised concert with people from around the country texting in photos of their families watching the Vigilia Virtual from home.
On Sunday afternoon, Paul and I donned masks and drove into Managua to see for ourselves what it looked like. Every other 19th of July, we are stuck in traffic as soon as we hit the edge of Managua, wall-to-wall buses bringing 600,000 people to the plaza, passengers spilling out the windows and waving flags from the atop the buses. This year, one lonely half-empty bus running it's regular route was the only traffic.
Normally we can't get close to the Plaza in a car, instead walking the last two miles down the boulevard crammed with vendors and people until when we finally get up next to the stage and can no longer move due to the absolute mass of celebratory spectators. This year, the six-lane boulevard was empty of traffic and pedestrians alike. Right down in the Plaza we encountered a handful of people tailgating in their cars, and on the corner there was a group of drunks under the only shade tree. Police watched quietly from the edges wearing masks with the police insignia in the corner. There were a few t-shirt vendors hawking their wares, but their biggest sales were in masks - red and black, FSLN, and Che Guevara masks.
It was eerie to find the streets so empty, but it was not surprising to me. The Frente Sandinista de Liberacion Nacional (FSLN) was founded in the context of clandestine guerilla warfare in the 1960s, when lives literally depended on Sandinista combatants unquestioningly following orders. As a result, to this day its members are disciplined. So when the FSLN leadership announced there would be no mass rally, its membership fell in line and flew their FSLN and Nicaraguan flags from home.
What message did the FSLN leadership deliver to its base of supporters this 19th?
First, the visual message: the speech was not given to an empty Plaza, nor was it prerecorded from home. The President spoke from the historic smaller plaza where the first impromptu Triumph of the Revolution festivities took place 41 years ago. With him were the Vice President, cabinet members and an audience of Sandinista Youth - all wearing masks and socially distanced.
Second, the spoken message: the President's speech on the 19th of July is like the State of the Union in the U.S. - Daniel Ortega talks about what the government has accomplished in the past year and announces new programs. This year he spoke almost exclusively about health care. In a time when news printed in other parts of the world about what's happening in Nicaragua tells the story that  the Nicaraguan government is "doing nothing" to protect its people from the pandemic, the President's message left no doubt that this accusation does not reflect the reality here.
After giving detailed statistics on improvements in the free public health care system over the past 12 years in government - including 18 new hospitals, 59 remodeled hospitals, 1,476 new health centers & health posts, 178 homes for pregnant women, 80 mobile clinics (made from semi trucks confiscated by police from drug trafficking) and 5 specialized clinics - Ortega declared that prioritizing long term investments in health "has allowed us to successfully confront this pandemic." 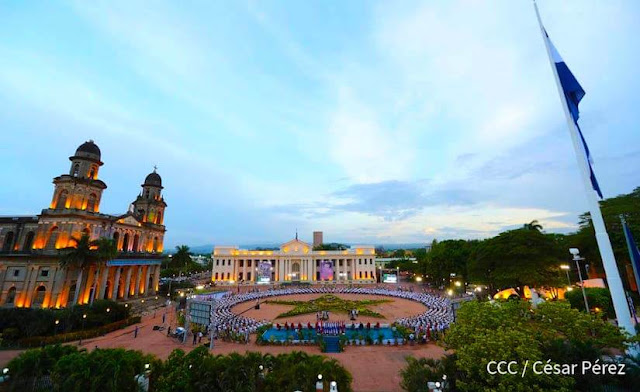 Because in the end, this year's message to the Sandinista base was not - as it has been in much of the world - "Let's do what it takes to get through this pandemic and then we can get back to normal." The message, rather, is an extension of what we have heard Nicaraguans repeating to us for the last four months, "This virus is here to stay, and we have to learn to combat it long term," just as we have done and are doing with other diseases: 2.23 million people vaccinated March-June, half a million homes fumigated against mosquitoes, 21,600 women cared for in homes for pregnant mothers. In addition to all the public health measures being taken - masks, social distancing, hand washing, sending the Army to disinfect public spaces - Nicaragua's strategy to fight this pandemic is  part of a much larger struggle, part of an alternative development strategy based on solidarity and justice which puts people first.
"The worse epidemic is one that causes hunger," Daniel Ortega declared this 19th of July 2020. "The epidemic of savage capitalism, which was imposed on the world until this epidemic came and shook it."
- Becca
Posted by Center for Development in Central America at 10:00 PM