I love this time of year here in Nicaragua. The rains have usually slacked off which lowers the humidity, but the land is still green with foliage. The temperatures are pleasant, the skies are blue and clear, and everyone is getting ready for festivities.

Sarah and Daniel start decorating for Christmas and adorn our house with lights and decorations. On the first Sunday of Advent, we begin hanging our Advent banners, made long ago with Brethren Church volunteers, when we were in the States running shelters. These banners are 34 years old. Sewn on the banners are the different themes for each Sunday. The first banner is HOPE and the image we chose was of Central America. 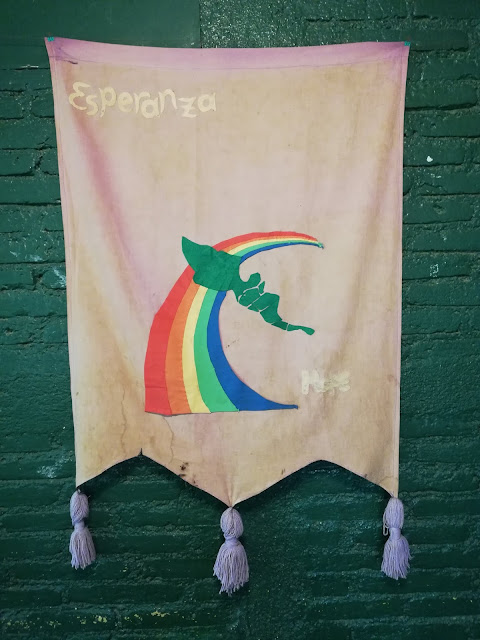 In the 1980’s, Kathy, Sarah, Mike and I all went to Nicaragua during the Contra War. One would think that a war zone would not represent HOPE, but it did for us.

In the States we worked with the poor, the homeless, the battered, and the outcasts. These folks were taught by our U.S. society that they lived as they did due to their own bad choices…not as a result of our society’s priorities.

In Nicaragua, the people had had a revolution and had overthrown a dynasty of dictators and were now in charge of their own destinies. With the Nicaraguan citizens actively participating, the government back then was filled with HOPE for a better future. Investments in education and health care were reaching people in the most remote areas. Land reform was giving landless peasants swaths of earth on which to grow food for themselves and for others who were hungry. Local leaders in communities were given authority and resources to make real changes in their communities. It was a land of endless possibilities. HOPE was high.

Then the United States, with the help of exiled, wealthy Nicaraguans killed the HOPE as they killed Nicaraguans working for change. The CIA Handbook for the opposition…the Contras…instructed them in how to destroy the nation’s infrastructure….and how to target nurses, doctors, teachers, community leaders, etc.…and torture and murder them. Amidst all the death and fear, HOPE was slowly choked to death.

This process has happened all over Latin America, when the people actually get control of their own governments. They make changes towards socialism and the lifting up of the poor, then the U.S. with the wealthy of that nation join together to kill HOPE. The best way to break anyone is to take away their HOPE. Torturers know this. Taking away HOPE is much more effective than pain.

The four Sundays of Advent highlight the four things people need to not only survive but flourish: HOPE, peace, joy and love.

HOPE helps us get up in the mornings…otherwise we stay in bed wasting away in our misery. Depressed people struggle to feel HOPE.

HOPE helps us to continue to work…hopefully for the good of our world. If we have no HOPE, then why bother?

HOPE helps us see the light at the end of the tunnel. If we have no HOPE, we can wander aimlessly.

So where do we find HOPE, when life feels so hard?

In Mike, who picks up his phone EVERY. SINGLE. TIME. it rings to talk to buyers, farmers, and the organic agriculture cooperative in hopes of making this year’s crops profitable for the farmers.

In a family member who struggles with mental illness but still struggles to get in control.

In my 91- year old mother, who tries her best to enjoy life to its fullest even though she is losing more and more of her hearing and eyesight while being stranded in our home.
In the passion of the youth to demonstrate and protest for racial justice and climate change.

In the staff of the clinic, who work hard to kindly meet the needs of the patients even when the patients grump and grouse.

In the farmers, who year-after-year continue to plant while climate change messes with their crops over-and-over again.

And in the poor, who do NOT lie in bed and curl up in a ball and die.

Maybe I’m confusing stubbornness with HOPE or maybe the two are connected. We won’t give up. We won’t. Is it HOPE or stubbornness? Or does the stubbornness feed the HOPE, or is it vice versa?

You decide. Whichever it is, stubbornly hang on to that HOPE or all is lost. The torturer wins.
-Kathleen
NOTE: If you are reading this blog using the mobile version,click on "web version" to see the full blog with all the features including "subscribe to blog by email".
Please join us and also share on your social media.
Donate here to the ongoing work of the CDCA with the poor in Nicaragua:
https://donatenow.networkforgood.org/jhc-cdca
Posted by Center for Development in Central America at 9:30 PM