Future Fridays: How do you want governments to respond to disasters?

I first arrived in Nicaragua to volunteer with the JHC-CDCA nine months after Hurricane Mitch in 1999. On my first day in the country, Mike drove me through three muddy arroyos out to a field with 15,000 refugees in it. I ducked under the barbed wire conducting electricity to stand in the mud in front of a black plastic tent where a woman so tiny she didn’t even come up to my shoulder showed me the rain running onto her dirt floor and cried, asking me for a few sheets of zinc roofing for her family. 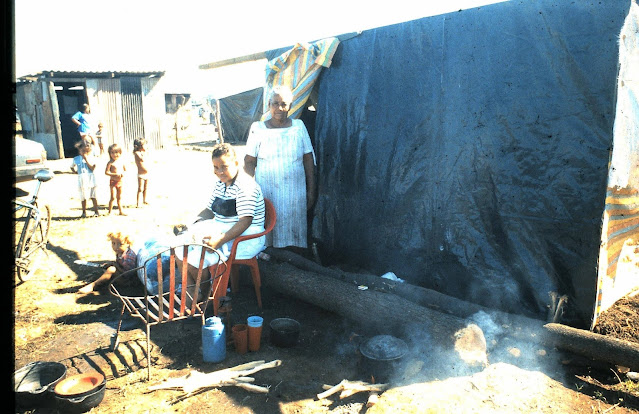 That was just the first visit of the first day…I had experiences like this all day every day for the three months I was in the community of Nueva Vida. And Nueva Vida was just one of dozens of refugee camps spread across Nicaragua after Hurricane Mitch, filled with thousands and thousands of people all with the same plight: Hurricane Mitch killed 19,000 people and left 2.7 million homeless in Nicaragua and Honduras.

Meteorological warnings for Hurricane Mitch were dire – but the Nicaraguan government did nothing to prepare or warn the population. The President at the time, Arnoldo Alemán received a phone call from the the mayor of Posoltega telling him that the Las Casitas volcano was unstable and begging him for help evacuating people in danger. The President refused to declare an emergency or send in rescue teams.  Hours later, more than 2,000 people died on Las Casitas when a torrential river of mud literally ripped children from their mothers’ arms. In other areas, people climbed into trees to escape rising waters and sat for days in the branches, awaiting rescue that never came.

When the rains finally stopped – after dropping more than 10 feet of water in a matter of days – aid poured into the country. President Alemán embezzled relief money and supplies for himself and his cronies; most of the aid never reached the victims of Hurricane Mitch. The extent of government aid in Nueva Vida was a tiny square of a field for each family and a piece of black plastic. The houses in Nueva Vida were built by church groups and NGOs. The latrines were dug by Jubilee House Community volunteers. The government stood by as its people suffered – not just during the Hurricane, not just for months afterwards, but for years. I know this is true because I saw with my own eyes the suffering of the survivors, heard with my own ears their stories, and felt with my own heart their pain. Hurricane Mitch was a natural disaster, but the people’s suffering was multiplied ten-fold by the human disaster that followed it.

This Tuesday November 3rd, Hurricane Eta hit Nicaragua as a Category Four Hurricane, hitting vulnerable coastal and rural communities in the North Caribbean Autonomous Region.  Rains are continuing as I write, and although there is damage to infrastructure, homes and crops, there have only been two lives lost as of Thursday.

We began getting reports of a coming possible storm late last week. On Friday the National System for Prevention, Mitigation and Attention to Disasters, SINAPRED, held a press conference and on Saturday they sent out a convoy of trucks with supplies for emergency shelters in Bilwi. Monday the government declared a red alert for the northeast, yellow for the northern region, and green alert for the rest of the country. From the beginning, the organization on a national and local level has been incomparable with the disastrous lack of response to Hurricane Mitch. SINAPRED has quickly coordinated the mobilization of a massive network of first responders: local emergency networks, municipalities, the Navy, 9,000 specialized Army troops deployed around the country, police, firefighters, youth organizations, the water department, the electrical department - the health department alone sent out 6,500 workers and prepared enough medicine, food and supplies to see patients in special field hospitals for 45 days without restocking. They fumigated and cleaned more than 65 emergency shelters ahead of time, preparing dozens more daily as the storm progressed across northeastern Nicaragua and brought on floods nationwide. More than 88 tons of food, hundreds of mattresses, 500 kg of chlorine to purify water and other supplies were sent early across the country to affected areas. As soon as the storm knocked down trees, emergency services were out clearing roads of downed trees and wires; in one river workers repelled down a bridge to clear debris with chainsaws as the swollen river raged around them. More than 35,000 people were evacuated to emergency shelters before and during the storm. 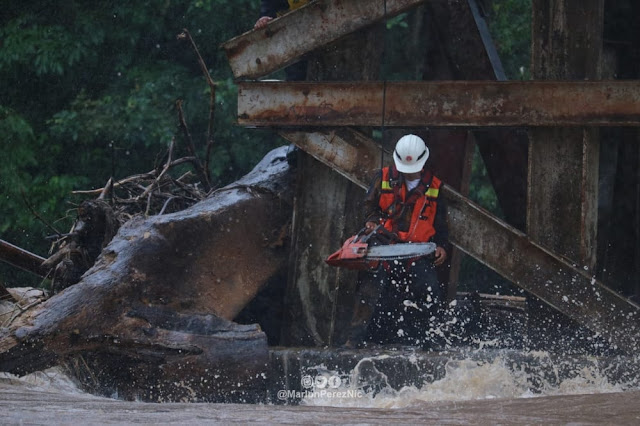 Eta has left Nicaraguan territory, but rains are continuing today and and will continue tomorrow. Meanwhile, crews are beginning to assess the damage, and repairs and rebuilding will begin. In watching the emergency response closely, I am confident that this time, the Nicaraguan people will not be left alone in the aftermath of the storm. Already, Hurricane Eta is leaving a different mark on Nicaragua than Hurricane Mitch. In Bilwi where the eye of the hurricane passed so close, ten pregnant women who had been evacuated from coastal Miskito villages gave birth in the Army’s emergency hospital during the storm. One of these is baby girl named Eta.
– Becca 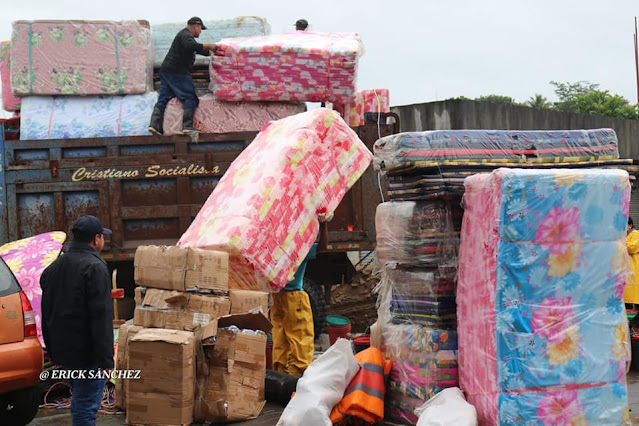 NOTE: If you are reading this blog using the mobile version,click on "web version" to see the full blog with all the features including "subscribe to blog by email".
Please join us and also share on your social media.
Donate here to the ongoing work of the CDCA with the poor in Nicaragua:
https://donatenow.networkforgood.org/jhc-cdca
Posted by Center for Development in Central America at 8:32 PM